Rift Valley, Kenya – It was seven years ago when Job Chebon, owner of a tourist lodge on the edge of Lake Baringo, first noticed the waters near his property rise dangerously.

“The water would come and then recede. For years, it would come a little bit further to dry land, to our homes, then go back,” he said earlier in August, standing on a sandbag leading to the flooded reception lobby of his Soi Safari Lodge – at least, what remains of it.

The rising waters of Lake Baringo in the Great Rift Valley have dealt a heavy blow to tourism, a key sector in this part of Kenya.

Chebon said he had lost thousands of dollars in accommodation fees and damage to his property, while several other hotels in the region have also been either totally or partially submerged.

Elizabeth Meyerhoff, an anthropologist, who along her husband Murray Roberts, has been studying the lake since 2013, said the water level has been rising at about 2.5cm (0.98 inches) a day.

The couple, who live next door to Chebon’s lodge, have also been running a programme aimed at rehabilitating semi-arid environments by producing dry land seed which they have already distributed to more than 900 farmers.

Almost all the land where the grass, mostly meant for grazing was planted, is underwater. The couple’s stores, offices and a dispensary have had a similar fate.

“The water comes from the rivers, but because of deforestation it’s bringing down huge amount of flash flooding with sediments which fill the bottom of the lake,” said Meyerhoff, after a tour on a boat – a mode of transport that is the new norm in these parts of Baringo.

Climate change and unusually heavy rains this year have also contributed to the problem.

The rising waters have displaced more than 5,000 people in 2020, according to government officials, submerging homes, schools, roads, hospitals, farmland – and even entire islands. 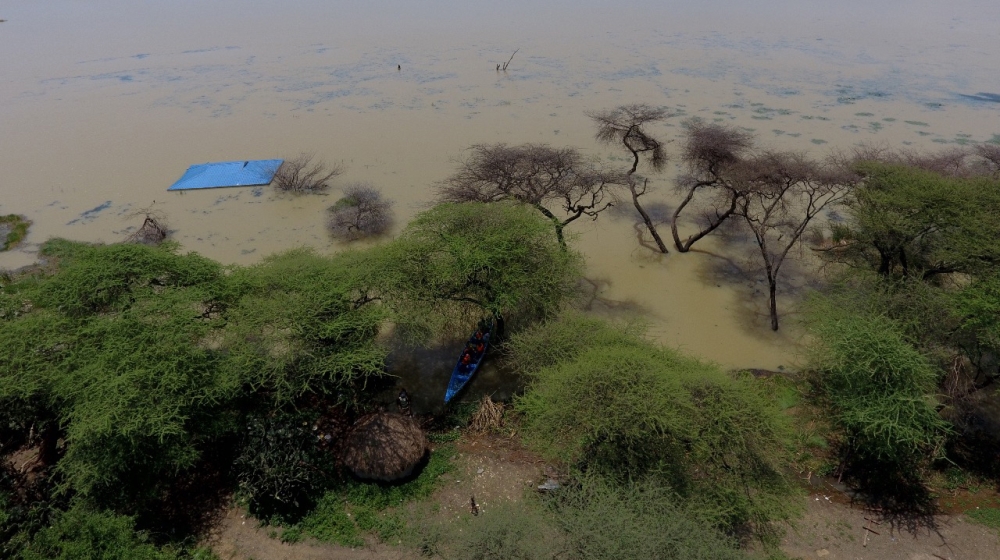 The rising waters of Lake Baringo have displaced thousands of people, submerging homes, roads and farmland among others [Daniel Munene/Al Jazeera]

“This island was whole, we could move around,” said Nongaseuria Lenaisiaku, an elderly lady who has had to relocate to higher ground twice after Kokwa Island was split into three parts.

“Now the water has separated us from our relatives. I don’t even have a boat take me to other parts of the village.”

Nearby, in Rugus, another fishing village of mud-thatched huts, Singh Lenapunya was seated on his raft – scaling fish he had just caught. He acknowledged that the rising waters have brought along plenty of fish – but also crocodile and hippos. A herdsman was recently killed by a crocodile.

However, it is not just Lake Baringo and its dependents that are in trouble.

Further to the south, Lake Bogoria – a World Heritage site which at times hosts up to 1.2 million flamingoes – has also been rising. Just a few years ago, Baringo and Bogoria – freshwater and alkaline lakes, respectively – were 20km (12 miles) apart, but local officials say that distance has now been cut to 13km (eight miles).

Located on an eponymous national reserve, Lake Bogoria is a significant tourist attraction, whose hundreds of bird species and beautiful landscape, as well as geysers and hot springs, draw visitors from many parts of the world. 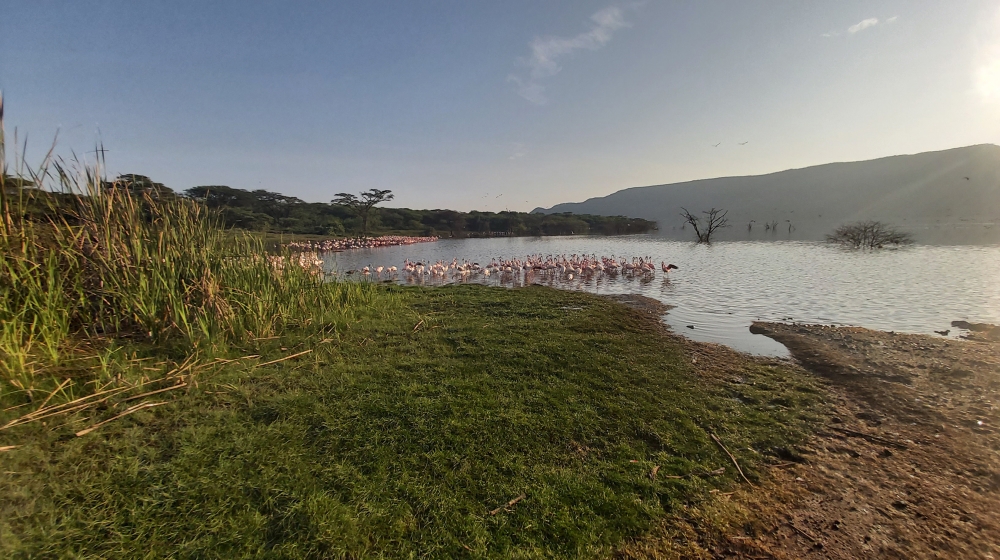 “Almost 80 percent of the hot springs are under water, especially the main ones which were shooting almost three metres up,” said Kimaru. “They used to be our main tourist attraction but now the number of visitors has reduced. The main road, the gate to our reserve and our offices are under water – we have to move for a second time. The hospital, hotels and homes adjacent to the reserve are also submerged.”

Meanwhile, there are growing concerns about the swamps between the lakes. Both Meyerhoff and Kimaru said if the alkaline water from Bogoria reached the swamps which link to Baringo’s freshwater – it would be an ecological disaster.

With both lakes having no known channels that allow the flow of excess water, some scientists have suggested building a barrier between them. Others have recommended constructing a canal for water to flow out of Lake Baringo, which is rising faster. They say the water can be channelled through a natural course outlet further north.

It is still unclear, however, what the effect of such a move would be on Kenyan farmers and pastoralists downstream, as well as the lake itself.

Government officials told Al Jazeera they are examining these suggestions, while also carrying out a study to find out whether there are other reasons why the lakes are rising so fast to determine safe solutions to protect them and the millions of people whose lives are at stake.

Back in Soi Safari Lodge, Chebon said he is afraid that it is only a matter of time before his entire property – and with it, his entire livelihood – is swept away by the rising waters.