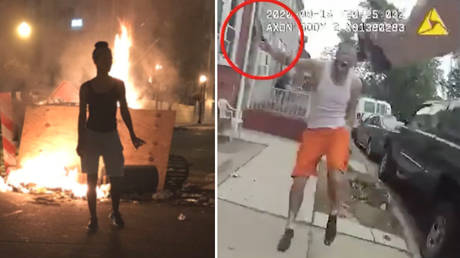 Alleged Antifa agitators, rioters and irate protesters have swarmed a police precinct in Lancaster, Pennsylvania, blockading officers inside and pelting the building with stones and debris, and lighting fires outside.

The violence is an apparent response to the fatal police shooting of 27-year-old Ricardo Munoz, who was killed after he charged at an officer with a knife on Sunday.

Protesters and alleged Antifa took to the streets and engaged in pitched battles with police, bombarding them with rocks and stones. Riot cops then deployed tear gas.

BREAKING: police make a full offensive in Lancaster, Pennsylvania to clear out BLM and Antifa rioters After they destroyed city property, including a police vehicle, created barricades, and threw rocks/bricks at officers The unlawful assembly was declared hour ago pic.twitter.com/pg8K5wG9qd

Agitators could be seen destroying several parked police vehicles outside the local precinct, as others erected barriers to prevent police reinforcements from being deployed.

Both the police station as well as the post office were pelted with debris as the violence spread. It wasn’t long before local stores were trashed and looted.

BREAKING: Antifa has begun breaking the windows of the Lancaster police precinctOfficers are responding with non lethal rounds and are now in the streets pic.twitter.com/icg1rDxxC9

BREAKING: officers quickly move to secure a detective vehicle that Antifa destroyed in order to secure the weapons locked inside The swift action shows how much of a threat they thought it would be if BLM rioters obtained the firearms pic.twitter.com/zv43rWkrDD

There were reports of multiple arrests at the scene, with police conducting an aggressive operation to round up those violent agitators they managed to identify.

BREAKING: cops are driving around, jumping out, running full speed at rioters and arresting them using marked vans Here 4 people were arrestedThe cops said they were targeting specific individuals who they ID’d committed crimes throughout the night Video below shows more pic.twitter.com/2IgUtMUZEA

There were also reports of police snipers having been deployed to the roof of the precinct, but there was no indication that they engaged any of the rioters with any form of munitions, non-lethal or otherwise.

The violence began at approximately 4:13pm local time, when police received a domestic abuse report, after a young man became aggressive toward his mother while attempting to break into her house, as reported to them by his sister.

The man charged at the first attending officer on the scene with a large knife in his hand, held over his head, at which point, the officer opened fire, killing him.

Munoz’s body reportedly remained on the sidewalk for four hours, until 8:35pm, when it was placed into a coroner’s van.

The officer’s body cam footage has been released, but, while it appears to show the deceased man was armed and charged the officer despite orders to drop the knife, it doesn’t indicate one way or the other whether the use of force was justified, according to Lancaster County District Attorney’s Office, which is conducting an investigation into the incident.