A firefighting pilot was killed in a helicopter crash as crews worked in blistering heat on Wednesday to tackle fires started by lightning strikes across northern California in the United States, forcing tens of thousands of people to flee their homes.

Nearly 11,000 lightning strikes were documented during a 72-hour stretch this week in the heaviest spate of thunderstorms to hit California in over a decade, igniting 367 individual fires. Almost two dozen of them have grown into major conflagrations, authorities said.

Ash and smoke filled the air in the city of San Francisco, which was surrounded by wildfires burning to the north, east and south. Will Powers, spokesman for the California Department of Forestry and Fire Protection (CalFire), said thousands of residents were under mandatory evacuation orders in an area north of San Francisco, collectively dubbed the LNU Lightning Complex.

The fire had consumed nearly 20,234 hectares (50,000 acres) on Wednesday night, and jumped across the main Interstate 80 highway earlier in the day, briefly blocking traffic in both directions.

In Vacaville, a city of about 100,000 people between San Francisco and Sacramento, police and firefighters went door-to-door before dawn in a frantic scramble to warn residents to evacuate as flames bore down on the area.

At least 50 structures were destroyed, including some homes, while 50 were damaged.

Wearing a singed nightgown, Diane Bustos said her husband abandoned their car as it caught fire and then blew up on the west side of Vacaville early on Wednesday. She lost both her shoes while she and her family ran for their lives.

“I made it, God saved me,” Bustos told local television station KPIX. 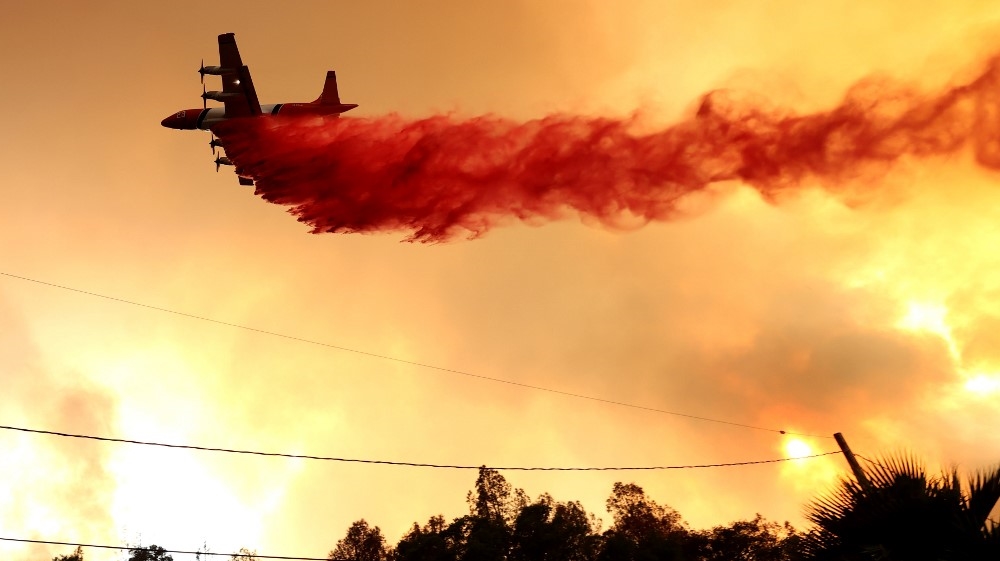 Karen Hansen evacuated her Vacaville home late on Tuesday as the flames rushed towards their small farm, packing up her smaller animals but unable to bring along two beloved horses.

“The whole sky was red-orange and it was coming over the hill there and it was massive. I’ve never seen anything like it and it only took a few minutes to get here,” she told The Associated Press news agency.

They returned on Wednesday to find the house and barn destroyed, but Hansen was thrilled to see that her horses had survived. “I’m not upset about the house. I’m just happy that my horses and animals are alive and my daughter,” she said.

There were social media accounts of people trapped in the blaze, but CalFire’s Powers said authorities had no reports of missing people.

In central California, a pilot died when a helicopter on an early morning water-dropping mission in Fresno County, about 160 miles (258 km) south of San Francisco, crashed.

The Fresno County Sheriff’s search-and-rescue team was summoned shortly after 11am to recover the pilot’s body, but it had not reached the crash site because it was in the fire zone, said department spokesman Tony Botti.

“They’re trying to methodically and safely get them in and hopefully not get exposed to the fire,” he said.

California Governor Gavin Newsom said “we are experiencing fires the like of which we haven’t seen in many, many years”, adding he had requested 375 fire engines from out of state to assist in battling the blazes.

He declared a statewide fire emergency on Tuesday.

Grateful for our firefighters, first responders, and everyone on the frontlines protecting Californians during this time.

Fanned by “red-flag” high winds, the fires are racing through vegetation parched by a record-breaking heatwave that began last Friday. Meteorologists have said the extreme heat and lightning storms were both linked to the same atmospheric weather pattern – an enormous high-pressure area hovering over the US’s southwest.

The last time California experienced dry lightning storms of such devastating proportions was in 2008, according to CalFire.