Progressive Democratic candidates for the House of Representatives scored victories in primary elections in the United States on Tuesday.

At the same time, Representative Rashida Tlaib, one of the most visible new members of Congress, claimed victory over challenger Detroit City Council President Brenda Jones in a Michigan primary election.

“It is historic that this year, of all years, we’re sending a Black, working-class single mother, who has been fighting for Black lives since Ferguson, all the way to the halls of Congress,” Bush said in her victory speech.

Bush became a community activist after Michael Brown, a Black teenager was shot and killed by police in Ferguson, Missouri, a suburb of St Louis, in 2014.

Bush and congressman Clay are both Black.

Clay had represented the area around St Louis since 2001 after succeeding his father Bill Clay who was first elected to the district in 1968.

In Detroit, results on Wednesday morning showed Tlaib with 63,650 votes to Jones’ 32,582 with 90 percent of precincts reporting in the nomination contest, a decisive edge.

“Voters sent a clear message that they’re done waiting for transformative change, that they want an unapologetic fighter who will take on the status quo and win,” Tlaib said in a statement.

Tlaib is a member of the “Squad” of four progressive congresswomen elected in 2018 that includes Ocasio-Cortez, Ilhan Omar and Ayanna Pressley. 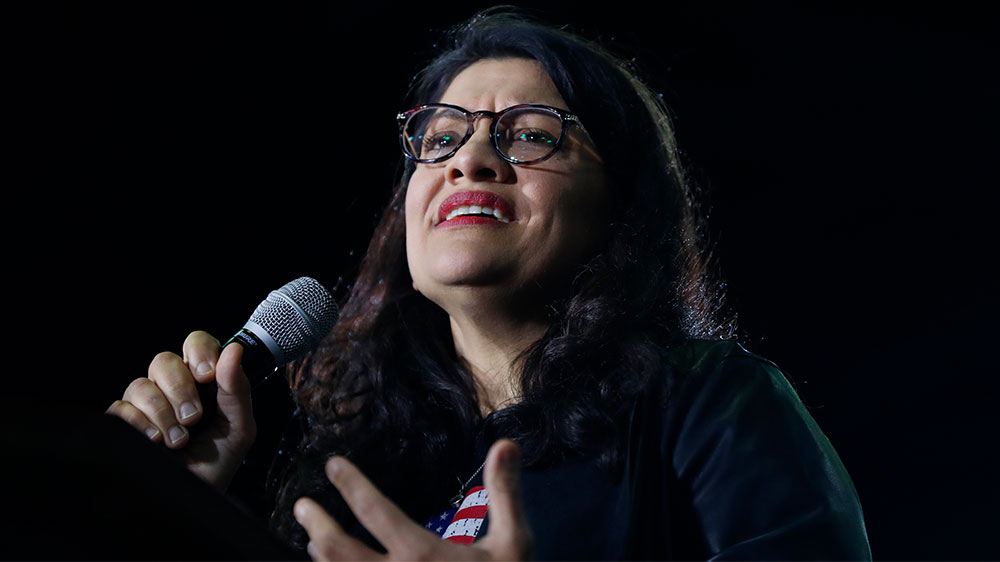 US Representative Rashida Tlaib won decisively in Michigan’s August 4 primary in a rematch with Detroit City Council President Brenda Jones whom she had only narrowly defeated two years ago [File: Paul Sancya/AP Photo]

The race for the Democratic nomination in Tlaib’s district, which contains Detroit and some of its suburbs, had been a rematch of a close 2018 election that Jones lost by fewer than 1,000 votes.

Tlaib had a fundraising and polling edge over Jones, 60, a prominent politician in the predominantly Black city of Detroit who had endorsed Biden.

Tlaib, 44, born to Palestinian immigrants, was one of the first two Muslim women elected to Congress.

In Kansas, Republican US Representative Roger Marshall won the nomination to run for a seat in the US Senate on Tuesday, defeating right-wing Republican Kris Kobach, an anti-immigration firebrand who had advised President Donald Trump’s 2016 campaign.

Marshall, 59, was supported by establishment Republicans who feared a polarising figure like Kobach could lose the Republican-leaning Kansas seat in November to Democrats.

Marshall is a doctor who has represented western Kansas in the House since 2017. He won with 38 percent of the votes, beating Kobach by nine percentage points.

Republicans presently have a 53-47 majority in the US Senate. US political analysts see the competition for Senate control in November as either a toss-up or slightly favouring Democrats.

Congratulations @coribush, looking forward to making good trouble with you in DC next year. pic.twitter.com/tm8a9YAHf5

A Reuters/Ipsos poll conducted on August 3-4 found that Democratic candidate Joe Biden leads Trump by 10 percentage points in support among registered voters nationwide, with fewer than 100 days to go before the election.

A plurality, 44 percent, believe Biden would be better than Trump at steering the US’s response to the coronavirus pandemic which has now killed more than 157,000 people in the US.

About 57 percent of Americans said they disapproved of the way Trump was dealing with the COVID-19 pandemic, while 38 percent approved.

The survey had a credibility margin of plus or minus 4 percentage points.