Wildfires raged unchecked across parts of the western United States on Wednesday amid gusty and dry conditions, but forecasters said some weather relief was in sight that could help firefighters overwhelmed by the blazes.

Winds gusting as high as 80km/h (50mph) fanned dozens of catastrophic fires across a large swath of Washington state and Oregon – territory that rarely experiences such intense fire activity because of the Pacific Northwest’s cool and wet climate.

The blazes, which also forced the evacuation of much of Medford in Southern Oregon, could bring “the greatest loss in human lives and property due to wildfire in our state’s history”, Brown said at a news briefing.

In California, where nearly 930,800 hectares (2.3 million acres) have burned, winds stoked unprecedented numbers of fires that forced rescues and evacuations.

A massive cloud of smoke covered much of California, blotting the sun to an eerie orange glow over San Francisco.

Firefighters were struggling to try to contain and douse the blazes and officials in some places were giving residents just minutes to evacuate their homes. The fires trapped firefighters and civilians behind fire lines in Oregon and levelled an entire small town in eastern Washington.

The scenes were similar to California’s terrifying wildfire drama, where residents have fled fires raging unchecked throughout the state. But officials in the Pacific Northwest said they did not recall ever having to deal with so many destructive fires at once in the areas where they were burning.

Near Portland in Clackamas County, Oregon, sheriff’s deputies were travelling with chainsaws in patrol cars to cut up fallen trees blocking roads – and giving residents of threatened rural areas and those near communities several minutes’ notice to evacuate.

“These winds are so incredible and are spreading so fast, we don’t have a lot of time,” said Clackamas County Sheriff Craig Roberts.

Flames lick above vehicles on Highway 162 as the Bear Fire burns in Oroville, California on September 9, 2020. The blaze, part of the lightning-sparked North Complex, expanded rapidly as winds buffeted the region [Noah Berger/AP Photo]

Fires were burning in seven Oregon counties, and rural and suburban homes miles away from Portland, Oregon’s largest city, were under preliminary orders to prepare for possible evacuations. Three prisons were evacuated late Tuesday and Governor Brown called the state’s blazes unprecedented.

“We know our losses are going to be great, but we know that Oregon is strong and will stand together,” Brown said.

The Pacific Northwest is no stranger to wildfires, but most of the biggest ones until now have been in the eastern or southern parts of the region – where the weather is considerably hotter and drier and the vegetation more fire-prone than it is in the western portion of the region.

85+ large wildfires are raging across California, Oregon and Washington.

Fires in 2017 and 2018 crested the top of the Cascade Mountains – the long spine that divides dry eastern Oregon from the lush western part of the state – but never before spread into the valleys below, said Doug Grafe, chief of Fire Protection at the Oregon Department of Forestry.

“We do not have a context for this amount of fire on the landscape,” he said. “Seeing them run down the canyons the way they have – carrying tens of miles in one period of an afternoon and not slowing down in the evening – [there is] absolutely no context for that in this environment.”

In Washington state, Governor Jay Inslee said more than 133,546 hectares (330,000 acres)  burned in Washington in a 24-hour period – an area larger than the acreage that normally burns during entire fire seasons that stretch from spring into the fall.

About 80 percent of the small eastern Washington farming town of Malden was levelled by flames from a fast-moving fire on Monday. Among the buildings that burned were the town’s fire station, post office, city hall and library.

In Oregon, at least four major fires were burning in Clackamas County, a suburban county in Oregon that is a bedroom community of Portland. The entire county of nearly 420,000 people was put on notice to be ready to evacuate late Tuesday amid winds gusting up to 48km/h (30mph).

Several huge blazes burning in Marion County, southeast of the state’s capital city of Salem, merged overnight, colouring the sky blood red in the middle of the day. Thousands of people were braced to flee if evacuation orders emerged.

“It was pitch black dark out there – all you could see was red,” said Wendy Phelps-Chapman, activity director at the Marian Estates independent senior living centre in Sublimity, Oregon, which evacuated its 160 residents on Tuesday.

Near Eugene, Oregon, dozens of people ordered to evacuate on Tuesday couldn’t get out because fire debris was blocking roads, according to the Oregon State Fire Marshal. Fire crews eventually helped 46 people escape. 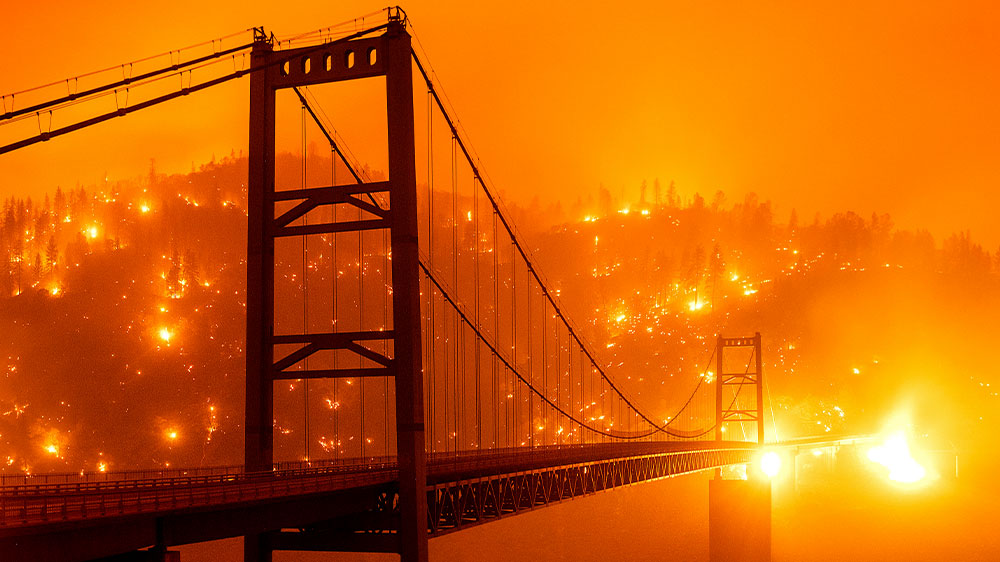 Fire embers light up a hillside behind the Bidwell Bar Bridge as the Bear Fire burns in Oroville, California. The blaze was part of the lightning-sparked North Complex fire, one of dozens of regional fires that spread due to high winds [Noah Berger/AP Photo]

In California more than 14,000 firefighters are battling fires.

On Tuesday, flames overtook 14 firefighters who had to deploy last-resort emergency shelters and destroyed a fire station in Los Padres National Forest on California’s central coast. They suffered burns and smoke inhalation, and three were flown to a hospital in Fresno.

Helicopters have been used in recent days to rescue hundreds of people stranded in the burning Sierra National Forest, where a fire has destroyed 365 buildings, including at least 45 homes. About 5,000 buildings were threatened, fire officials said.

Flames threatened the foothill community of Auberry between Shaver Lake and Fresno.

In Southern California, fires burned in Los Angeles, San Bernardino and San Diego counties. People in foothill communities east of Los Angeles were warned to be ready to flee, but the region’s notorious Santa Ana winds were weaker than predicted.

Two of the three largest blazes in state history are burning in the San Francisco Bay area, though they are largely contained after burning for three weeks.

Do not drag the military into politics: DG ISPR