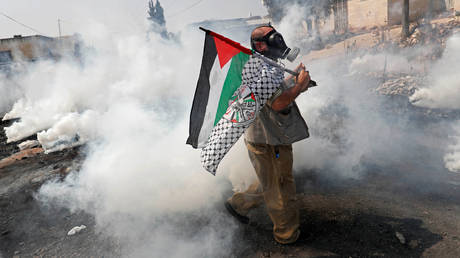 Palestinian factions, from the PLO to Hamas and Islamic Jihad, have condemned Bahrain’s decision to join the UAE in recognizing Israel, calling it a betrayal of the Palestinian cause.

US President Donald Trump announced on Friday that Bahrain will join the Emirates in signing a declaration of peace with Israel next week. The UAE had agreed to recognize Israel last month, the first Arab country to do so in 26 years.

Bahrain’s step is “extremely dangerous” and “torpedoes the Arab peace initiative, the decisions of the Arab and Islamic summits, and international legitimacy,” the PLO added, calling on Manama to “immediately retreat from this step that causes great harm to the inalienable national rights of the Palestinian people.”

In reaction, the Fatah-controlled Palestinian Authority recalled for consultations its ambassador from Bahrain on Friday, according to the Turkish Anadolu Agency.

The leadership considers it a betrayal of Jerusalem, Al-Aqsa, and the Palestinian cause. It’s a step that supports the legalization of Israel’s ugly crimes against the Palestinian people.

Hamas, which controls the Gaza Strip, described the agreement as a “political crime” and a “catastrophic failure to read the Zionist trend toward the region.”

This is apparently a reference to the proposed plan for Palestinian statehood, put forward by Trump earlier this year, which all Palestinian factions have rejected out of hand.

Another Gaza-based faction, Palestinian Islamic Jihad, called the agreement “treacherous” and said it revealed the “falsehood of Bahraini regime and its illegitimate rulers.”

Bahrain’s ruling al-Khalifa family is Sunni and has ties to Saudi Arabia, while the majority of the Gulf nation’s population are Shia Muslims.

As expected, Palestinian Islamic Jihad issued a statement condeming the #Israel–#Bahrain agreement to normalize ties. The statement calls the agreement ‘treacherous’ and charged the agreement revealed the ‘falsehood of Bahraini regime and its illegitimate rulers..” pic.twitter.com/2BPIQ8ds3g

Similar reactions came from Iran’s former Deputy Foreign Minister Hossein Amir-Abdollahian, who also served as foreign policy adviser to Ali Larijani, speaker of the Iranian parliament until May. He called the Bahraini settlement with the “Zionist entity” a “great betrayal in the liberation of Al-Quds” – the Arabic name for Jerusalem.

“The reckless should not pave the way for the Zionist agenda. They should think about the difficult days ahead and draw lessons from history. Tomorrow it will be [too] late,” Amir-Abdollahian tweeted, adding, “The American lifeline has been corroding for years.”

Arab and Muslim countries make up the majority of 29 UN members that have refused to recognize Israel since the Jewish state was declared in 1948.