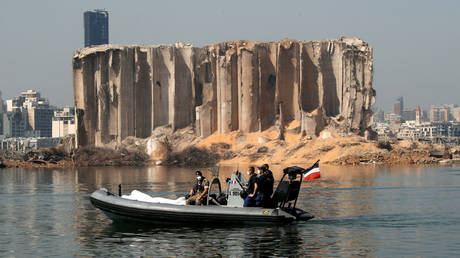 An inspection of Beirut port has uncovered tons of ammonium nitrate, the same highly explosive chemical substance that sparked the massive blast which ravaged the Lebanese capital in early August.

Following a meeting with top military officials in charge of work at the ill-fated port, Lebanese President Michel Aoun announced that yet another 4.35 tons of ammonium nitrate had been found at the location. It is believed to have been stored near the entrance to the port for some 15 years, since 2005.

The worrying discovery was made on September 2 and the ammonium nitrate stockpile has since been safely destroyed, Aoun said.

During their search, the Lebanese military also came across 143 containers holding other flammable material, he added.

The statement came after a major blaze erupted at the port on Thursday. According to sources, it began when sparks set flammable material alight during welding works. Aoun vowed that the perpetrators would be held accountable in the wake of the incident.

On August 4, around 2,750 tons of ammonium nitrate caused a massive mushroom cloud-like explosion at Beirut’s busy port. The blast killed 190 people, injured over 6,000 others and caused major destruction across the city. Nine people are still listed as missing, Aoun’s statement read.

The blast provoked major anti-government protests as demonstrators accused the authorities of negligence and lack of proper care in storing explosive materials.

Body for appointing judges must be ‘further empowered’