Protesters in Sudan have returned to the streets over the slow pace of change a year after a power-sharing agreement was signed between the country’s generals and a pro-democracy movement.

Draped in Sudanese flags and chanting slogans calling for more reforms, the demonstrators on Monday gathered outside the cabinet’s headquarters in the capital, Khartoum, to hand over a list of demands that include the election of a legislative body.

The Sudanese Professionals Association (SPA), an umbrella organisation of pro-democracy groups that spearheaded relentless protests that led to the overthrow of longtime President Omar al-Bashir last year, said on Twitter that security forces violently dispersed protesters after they demanded to meet Prime Minister Abdallah Hamdok and refused to negotiate with an envoy sent in his place.

Large amounts of tear gas were also fired at protesters.

Months of unprecedented street protests beginning in December 2018 forced army generals to step in and topple al-Bashir in April 2019. Demonstrations, however, continued well after al-Bashir’s downfall, with protesters demanding that power be handed over to a civilian administration.

Months of on-and-off negotiations culminated in the signing of a power-sharing agreement between the military and the pro-democracy movement.

“When we started the revolution, it was because of the economy,” said Mohammed Abdu, an engineer and member of the SPA, which helped strike the deal with the military.

“And when the first martyr fell, the goal became justice for those who lost their lives during this revolution,” Abdu told Al Jazeera. “We promised to hold those who killed civilians to account. That main demand has not yet been met.” 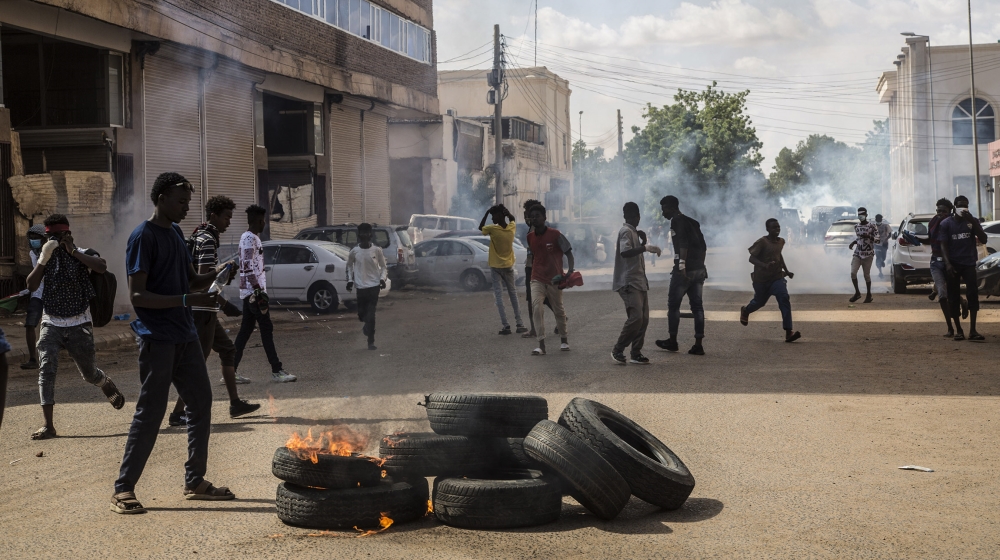 Mohammed Ogeil, a political activist, regretted that establishment parties involved in the negotiations did not have a long-term vision to get the country out of its political and economic woes.

“They were in a rush to reach a deal,” he said. “They lacked a national spirit and went into negotiations based on the interests of their own respective parties.”

The deal, known as the constitutional agreement and signed on August 17, 2019, provides for a joint civilian-military ruling body tasked with leading the country to elections after a transitional period of 39 months.

The 11-member governing body, called the sovereign council, is made up of five civilians, five military leaders and a consensus civilian agreed to by both sides. It is headed by General Abdel Fattah al-Burhan.

Meanwhile, a cabinet led by Hamdok is tasked with the day-to-day running of the country,

Protesters on Monday lamented the course that the transition had taken, saying that the military exerted too much influence on the civilian leadership.

“The course of the revolution should be corrected,” activist Awatef Ossman was quoted as saying by the Associated Press, calling the military’s presence in the government a “clear and specific obstacle”.

The prospect of a deteriorating economy, already battered by decades of US sanctions, also weighed heavily on people’s minds, with demonstrators at the rally demanding the organisation of a conference to steer the country out of the current crisis.

“The constitutional declaration was a settlement to reach a political solution for this country,” said political analyst Tahir Mutassim.

“It has been a year since it was signed and the people who were protesting are still guarding their revolution,” said Mutassim. “The international community is one of the important factors that can make sure no one hindrances this transition.”

Meanwhile, Hamdok called for political and popular support for reform.

“The state apparatus needs to be rebuilt, the legacy of [the old regime] needs to be dismantled and the civil service needs to be modernized and developed to become unbiased between citizens, as well as effective,” he said in a statement on Monday.

US senators vote to proceed with Trump's impeachment trial

Enemies of Armed Forces are enemies of Pakistan