Baghdad: Pope Francis embarked on the first-ever papal visit to Iraq on Friday and marked it with a call to end extremism and violence in his opening address to the country, long scarred by war and now gripped by the coronavirus.

The 84-year-old is defying a second wave of the global pandemic and renewed security fears to make a “long-awaited” trip to comfort one of the world’s oldest Christian communities, while also deepening his dialogue with Muslims. The 4-day trip is historic and will include visits to significant cities in Iraq.

Vatican News shared the Pope’s schedule for Saturday and he is set to visit two cities – Najaf and Ur. Due to depart from Baghdad at 7.45am [8.45am in UAE], the Pope’s first event of the day is a visit to Grand Ayatollah Sayyid Ali al-Husayni al-Sistani in Najaf, described as one of the leading spiritual leaders of Iraq’s Shia Muslims.

He will then depart for Nassiryiaat at around 10.15am [11.15am in UAE], for an inter-religious meeting at the Plain of Ur shortly after 11am [noon in UAE]. The Pope will then return to Baghdad, where, at 6pm [7pm in UAE] he will celebrate mass at the Chaldean Cathedral of Saint Joseph.

Both cities on today’s schedule are historically, culturally and religiously significant. Najaf, the 1,230-year-old city that is the spiritual capital of most Shiites around the world.

An antique bible is seen at the warehouse of a foundation specialising in the restoration of antique manuscripts, as Iraq prepares to receive Pope Francis, in Najaf, Iraq March 3, 2021. Picture taken March 3, 2021.
Image Credit: REUTERS/Alaa Al-Marjani

Its imposing shrine – with a golden dome and intricate tiles inside – is the burial place of the Prophet Mohammed’s son-in-law Ali, highly revered in Shiite Islam. In Najaf, Pope Francis will meet with Grand Ayatollah Ali Sistani, the top authority for most Shiite Muslims.

The 90-year-old cleric is never seen in public and rarely grants access to visitors, making the encounter one of the most extraordinary parts of the papal trip. The two will meet in Sistani’s humble one-storey home, with most press barred from attending the sit-down.

Ur, thought to mean “town” in Sumerian, is believed to be where Abraham – the father of Judaism, Christianity and Islam – was born in the second millenium BCE. From Najaf, the Pope will travel to the desert location of Ur, which was founded in the fourth millennium before Christ, and became a major city in the ancient Sumero-Akkadian empire. 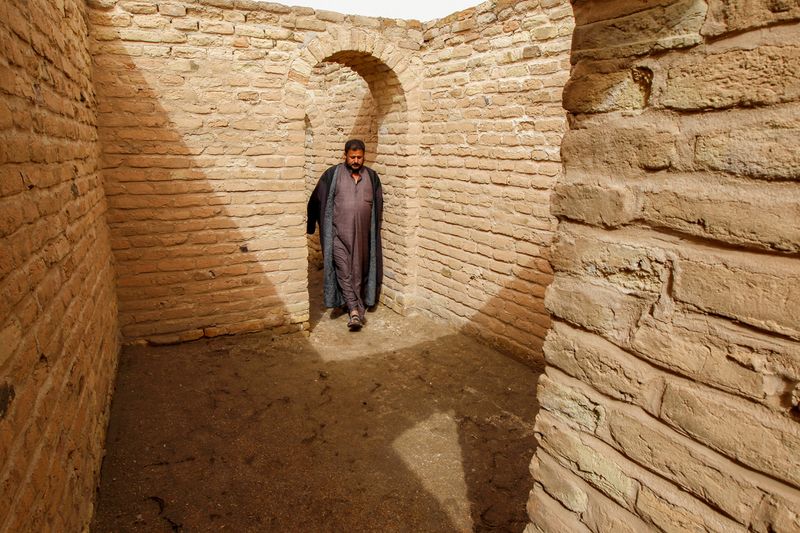 A guard inspects the ancient archeological site of Ur, traditionally believed to be the birthplace of Abraham, ahead of the planned visit of Pope Francis, in Ur near Nassiriya, Iraq February 18, 2021. Picture taken February 18, 2021.
Image Credit: REUTERS/Alaa Al-Marjani

Its most important feature is its ziggurat, a staggered, pyramid-like structure that was excavated between the two world wars. The pope is set to hold an inter-religious event in Ur.

Am I Danish?: Ibrahim vs the Ghetto Laws