MUZAFFARABAD/ISLAMABAD – Prime Minister Imran Khan Wednesday said having all of their miscalculated assumptions on Kashmir fallen apart, Narendra Modi’s fascist regime had been trapped in a blind alley and the situation would ultimately culminate into the freedom of the occupied valley.

“They are up in a blind alley. If they backtrack, they lose Kashmir. If they prolong (siege in Kashmir), the world is watching them… If they go to the extent of crushing Kashmiri people, it will prompt the world reaction,” the prime minister said addressing the Legislative Assembly of Azad Jammu and Kashmir as the country observed Youm-e-Istehsal to mark the first anniversary of Indian illegal actions of August 5, 2019.

Started with the recitation of verses from the Holy Quran and Naat after playing of national anthems of Pakistan and Kashmir, the session was chaired by AJK Legislative Assembly Speaker Shah Ghulam Qadir.

The proceedings were attended by AJK President Sardar Masood Khan and Prime Minister Raja Farooq Haider, and members of the assembly. The federal cabinet members including Senator Shibli Faraz and Ali Amin Gandapur, Kashmir Committee Chairman Shahryar Afridi, Special Assistant to the PM Moeed Yousuf and others were present in the galleries.

The prime minister, who earlier led a solidarity walk in the AJK capital along with AJK president and PM, said on August 5 last, India had committed a strategic blunder. He said the situation, which Kashmir was currently going through, would ultimately culminate into the freedom of Kashmir. Imran Khan said that Narendra Modi’s August 5 action was a “strategic blunder” as they are stuck in a “blind alley” now after the abrogation of Article 370 of the Indian constitution.

He said that Modi won election overwhelmingly on the basis of hatred against Pakistan and Hindutva card.

He, however, reiterated that Pakistan will always be with its brothers and sisters in the Indian Illegally Occupied Jammu & Kashmir (IIOJK) until they get the right to self-determination through a free and impartial plebiscite under the United Nations as per the relevant UNSC Resolutions.

“It is a crime against humanity that has destroyed lives, crippled livelihoods, and imperilled the very identity of the people of Indian Illegally Occupied Jammu & Kashmir (IIOJK),” he said.

“Let me be absolutely clear: Pakistan will always be with its brothers and sisters in IIOJK. We will never accept, and neither will the Kashmiris, the illegal Indian actions and oppression of the Kashmiri people,” Prime Minister Imran Khan said.

He also said that eight million Kashmiris have been made prisoners in their own homes, adding their communication with the outside world has been deliberately revoked to hide the scale of human rights violations being perpetrated against them by the Indian occupation forces.

PM Imran maintained that young men are being extra-judicially martyred in “fake encounters” and so-called “cordon and search” operations, almost on a daily basis, while the real Kashmiri political leadership remains incarcerated.

“The extremist and expansionist BJP-RSS combine, represented by the current Indian government, is unabashedly pushing the ‘Hindutva’ agenda,” the PM Office quoted him as saying.

He said that revocation of special status of the Indian Illegally Occupied Kashmir was as part of Modi’s election agenda, which he implemented after winning the election.

The Prime Minister said that Narendra Modi was hesitant to revoke the special status of IIOK in his last tenure.

The Prime Minister said that Modi’s move to revoke special constitutional status of Kashmir was based on four assumptions including pleasing his Hindu base, Pakistan will remain silent on the Indian move, the world power will not challenge his move and people of Kashmir will not retaliate and will be subdued by the use of force and massive troop deployment in the occupied territory.

The Prime Minister said that Modi committed a strategic blunder and he failed because Pakistan did not remain silent on the Indian move and atrocities being committed against the Kashmiri people.

He said that he personally took the important world leaders, including US President Donald Trump into confidence over the Kashmir situation and effectively used media to expose Modi’s fascist policies having ideologies similar to Nazis.

Due to the effective campaign, the European Parliament and British Parliament held discussions on the Kashmir, Pakistani diaspora are holding demonstrations to highlight the Kashmir cause.

The Prime Minister said that due to the effective policies of his government, Indian occupation forces could not commit atrocities on the Kashmiri people to a scale on which they wanted.

He said that the western media used to portray India a better country than Pakistan but during the last one year Pakistan’s image has improved due to effective policies of his government.

Imran Khan said that India’s designs in Kashmir have failed to break the spirit of the people of Kashmir and the Kashmiri people have become more resilient and valiant in the face of heightened restrictions and atrocities.

He assured the people of Kashmir and the lawmakers that his government will raise the issue of Kashmir at every forum.

He said that now no pro-Indian Kashmiri leader can be successful because there is resentment among Kashmiris.

He said that the pro-India Kashmiri leaders Farooq Abdullah have now become convinced that Quaid-e-Azam Muhammad Ali Jinnah was right and that they were deceived.

He said that the situation in the IIOK will further deteriorate as Indian has been trapped in the blind alley.

Talking about the release of new political map of Pakistan, he said that it is an important step and is aimed at telling the world that Kashmir is a disputed territory and its fate is yet to be decided according to the UN Security Council resolutions.

He said that it was imperative to release the map to counter India as it has shown Azad Kashmir and Gilgit Baltistan as part of its territory. He said the new political map will educate the youth about the true status of Kashmir.

On the occasion, the Prime Minister also announced a civil award for renowned Kashmiri leader Syed Ali Geelani who resigned from his post as chief of the All Parties Hurriyat Conference in June. “We will honour Syed Ali Geelani with Nishan-e-Pakistan on August 14. Such a person is recognised internationally for sticking to their stance,” he said.

“There will only be one conclusion of this, which is that Kashmir will be freed,” the premier added.

Prime Minister Imran Khan said Pakistan has so much potential that no other country has in the world but Pakistanis do not have idea of this potential. Pakistan developed fast in 1960s but gradually its progressed slowed down and the country’s economy dilapidated. However we should not be disappointed over the situation.

According to an official statement, the prime minister said that the Indian government is seeking to change the demographic structure of the region and turn its Muslim majority into a minority in blatant violation of relevant UN Security Council Resolutions and international laws, particularly the 4th Geneva Convention.

“As expected, the Kashmiris have rejected these illegal ‘engagements in deception’, and so has Pakistan,” the Prime Minister said.

Parliamentarians, journalists, humanitarian workers, international human rights organizations and members of the international community have also raised their voices on the continuing gross human rights violations in IIOJK, he said, adding “India stands exposed before the world, yet again, as an oppressor and aggressor. Its so-called secular and democratic credentials stand fully discredited.”

For the sake of the besieged people of IIOJK, and for the sake of fairness, justice and human dignity, he said, “it is imperative that the international community steps in immediately and backs its words of condemnation with practical steps that will force India to reverse its present course against the Kashmiri people.”

India has already failed in keeping the voices of the Kashmiri people from reaching the international community, he said, adding now “India will fail in forcing its majoritarian, ‘Hindutva’ mindset on a people unwilling to compromise on their just rights and fundamental freedoms.”

Imran Khan said that India must realize that martyrdom of each Kashmiri and the burning and destruction of each Kashmiri house will only further strengthen the Kashmiris’ resolve for freedom from Indian occupation.

“Throughout the Kashmiris’ struggle, Pakistan will stand shoulder-to-shoulder with its Kashmiri brethren until they realize their inalienable right to self-determination through free and impartial plebiscite under the auspices of the United Nations as per the relevant UNSC Resolutions,” he concluded.

PM participates in walk to express solidarity with Kashmiris.

Prime Minister Imran Khan on Wednesday led the walk organized by the Azad Jammu and Kashmir Government here in connection with the Youm-e-Istehsal to express solidarity with the struggling people of Indian Illegally Occupied Jammu and Kashmir (IIOJK).

The walk, which was also participated by AJK ministers and secretaries, besides leaders of all political parties and All Parties Hurriyat Conference, started from the Civil Secretariat and culminated at the United Nations’ Observers’ office at Domel Bridge.

The prime minister latter laid the foundation stone of ‘Jammu Kashmir Monument’ being constructed by the AJK government in the memory of the martyrs of Kashmir freedom movement. Additional Chief Secretary Development Syed Asif Hussain Shah briefed the prime about the monument.

Prime Minister Imran Khan soon after his arrival here in the AJK capital on Wednesday inaugurated a symbolic wall of resistance, portraying Indian atrocities in the Indian Illegally Occupied Jammu and Kashmir (IIOJK) and exemplary resistance by the people through painting and pictures reported in the international media.

The Azad Jammu and Kashmir (AJK) Government prepared the wall near the helipad where the prime minister landed before going to address the AJK Legislative Assembly on the occasion of “Youm-e-Istehsal” being observed to mark one year of India’s revocation of articles 370 and 35 A of its constitution abolishing the special status of Jammu and Kashmir on August 5, 2019.

The wall showing pictures of Indian atrocities and resistance by unarmed civilian people expresses the brief history of freedom struggle being pursued by the people of IIOJK for the last three decades.

Prime Minister Imran Khan appreciated the effort of the artist, who painted the wall and paid rich tribute to the just struggle of the people of occupied Jammu and Kashmir.

He expressed optimism that the great resistance of the people of Kashmir would soon bring fruit and would lead to the logical end of freedom.

China ends two-child policy, families allowed to have up to three children 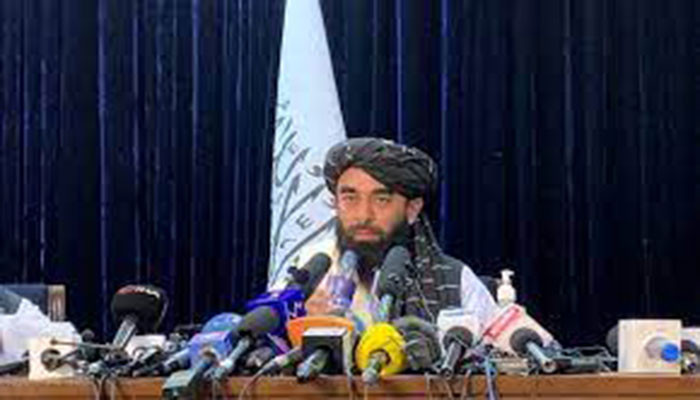 Global recognition being discussed by Afghan Emirate, US, says Mujahid

Happy Gurupurab 2020: Wishes, images to share with your loved ones for Prakash …