Islamabad, Pakistan – Pakistani Prime Minister Imran Khan has repeated comparisons between his Indian counterpart Narendra Modi and Nazi leader Adolf Hitler, as he reiterated support for Kashmiris’ right to self-determination one year after New Delhi revoked a special constitutional status for, and imposed a siege on, Indian-administered Kashmir.

Khan addressed the legislative assembly of Pakistan-administered Kashmir in the city of Muzaffarabad on Wednesday, reiterating the Pakistani government’s support for the long-standing dispute to be settled via a United Nations-mandated plebiscite.

“Today, Narendra Modi is exposed in the world,” said Khan. “And the biggest thing to come from that is that the world is now looking at Kashmir.”

Since then, hundreds of thousands of Indian security forces have enforced a virtual siege of the territory, implementing widespread curfews and lockdowns, controlling citizens’ movement, banning protests and cutting off the region’s mobile internet connectivity.

India and Pakistan have fought two of their three full-scale wars since gaining independence in 1947 over Kashmir, which both claim in full but administer separate portions of, divided by the Line of Control (LoC).
Since 2003, a ceasefire has been in effect on the LoC, but it is frequently violated by both sides.

On Wednesday, Pakistan’s military said Indian shelling in the Tatta Pani sector of Pakistan-administered Kashmir killed a woman and wounded six others.

Speaking in Muzaffarabad, Khan said the world community had earlier ignored the plight of Kashmiri civilians, but was now beginning to pay attention after the alleged rights abuses, documented by several rights groups and the United Nations, by Indian security forces.

“[Modi] knew that in the world, India is a very big market right now, with 1.25 billion people and that the world would want to keep good relations with such a big market,” he said.

“So he thought the world would remain silent.”

Earlier, Khan issued a statement on the anniversary of India’s action, terming it “illegal and unilateral” and the result an “unprecedented, inhuman military siege and communication blockade”.

“It is a crime against humanity that has destroyed lives, crippled livelihoods, and imperiled the very identity of the people of Indian Illegally Occupied Jammu & Kashmir (IIOJK),” he said in the statement.

A day earlier, Pakistan’s government released an updated official map of its territory, reiterating its claims to Kashmir and two other, smaller disputed territories.

The new map updates the official nomenclature on the Kashmir dispute, terming Indian-administered Kashmir to be “Indian Illegally Occupied Jammu and Kashmir”, and stating that the dispute must be resolved in line with a 1948 UN Security Council (UNSC) resolution calling for a plebiscite.

India similarly rejects Pakistan’s claims over territory it currently administers, claiming the entirety of Kashmir as its own territory. The Indian government does not, however, recognise the applicability of the UNSC resolution, which accords Kashmiris a right to self-determination.

Earlier in the day, Khan led a protest rally in Muzaffarabad, walking alongside political leaders from the territory. Similar protests were held across the country.

Speaking on Wednesday, Pakistan-administered Kashmir Prime Minister Raja Farooq Haider called for Pakistan to do more on the diplomatic front to push for a resolution to the Kashmir dispute.

“The foreign ministry should sit with us, the government of Kashmir, and trust us – we will never harm your cause, we should all work together,” he said. 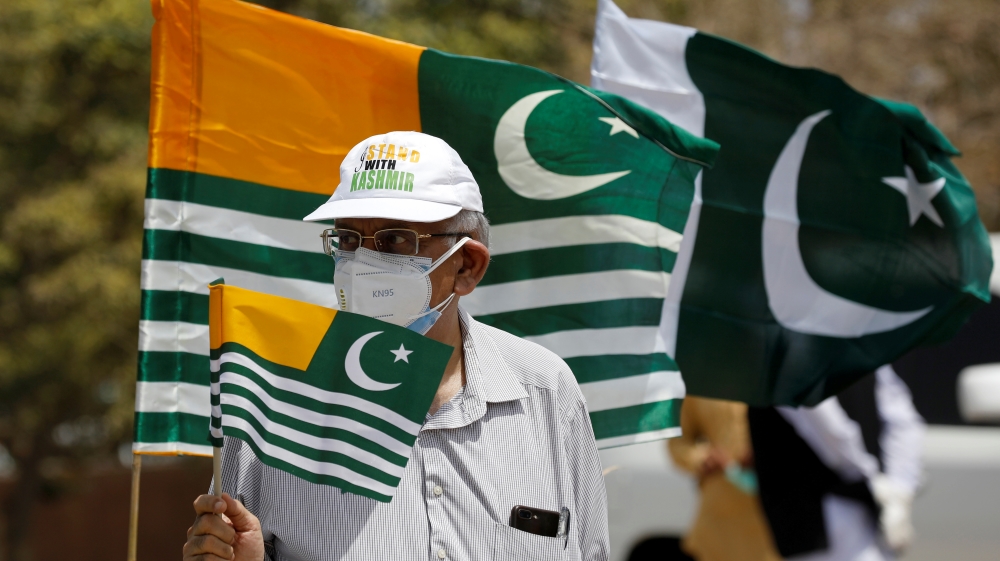 A man in Pakistani city of Karachi holds a flag as he observes a one-minute silence with others to mark the ‘Day of Exploitation in Kashmir’, one year after the Indian government stripped Kashmir of its autonomy [Akhtar Soomro/Reuters]