Beirut, Lebanon – Lebanese diplomat Mustapha Adib has been tasked with forming a government by an overwhelming majority of parliamentarians representing the country’s political establishment.

Adib received the votes of 90 MPs out of a possible 120, garnering the support of Hezbollah and its allies the Free Patriotic Movement and the Amal Movement, in addition to the Future Movement of former prime minister Saad Hariri and a number of smaller blocs.

Adib said it was no longer the time for words and promises.

“It’s time for work to dovetail efforts and join hands, to restore hope among the Lebanese,” Adib told reporters on Monday.

“By the grace of God Almighty, we hope we will be successful in selecting professionals with proven expertise and efficiency to implement the necessary financial and economic reforms.”

Seventeen MPs voted for other candidates, including 14 votes by the Lebanese Forces for International Court of Justice judge Nawaf Salam. About a dozen MPs either voted for no one or did not show up.

Like his predecessor Hassan Diab, who was named by a narrower margin by the country’s establishment following unprecedented anti-government protests that toppled a government last year, 48-year-old Adib is little-known to the public.

He has been Lebanon’s ambassador to Germany since 2013, has for two decades been an advisor to billionaire former prime minister Najib Mikati, and is seen as being close to the country’s major parties.

Monday’s binding consultations between President Michel Aoun and MPs amounted to little more than a rubber stamp on a decision that had been hashed out among the country’s sectarian leaders in the lead-up to French President Emmanuel Macron’s second visit to Beirut in under a month.

Macron arrives Monday night and has been in direct contact with Lebanese officials since his early August visit in the wake of a massive Beirut explosion that left at least 190 people dead and damaged large parts of the city.

Macron has urged Lebanon’s ossified politicians to come to a political understanding in order to pass through sweeping reforms and halt decades of corruption and mismanagement, which led the country into its deepest-ever economic crisis.

Adib will now have to form a government that can push through long-overdue economic, financial and governance reforms in order to unlock international support for the crisis-hit nation, which was already collapsing before the explosion.

The World Bank on Monday estimated the blast caused between $3.2bn and $4.6bn in physical damage,  mostly to the transport sector, housing and cultural sites, and incurred an additional $2.9bn to $3.2bn in losses to economic output.

The organisation estimated Lebanon’s immediate needs until the end of 2020 at between $605m and $760m, including for cash assistance, housing, and support for businesses.

Western donors see a resumption of stalled negotiations with the International Monetary Fund, as well as reforms to the electricity and financial sectors, as key conditions for providing large-scale financial assistance.

Adib’s predecessor, Diab, was unable to push through reforms because of high-level political meddling that is common in Lebanon, a country where major decisions are traditionally made between the handful of ruling sectarian leaders rather than governments.

“We know there are political forces behind these governments that don’t necessarily align with the governments that they appoint, and that makes it difficult to have a programme and solutions to these complicated problems,” Mike Azar, a senior financial advisor, told Al Jazeera.

He noted Diab’s government had faltered because it didn’t have a clear plan for how to adress the country’s challenges, and included a “hodge-podge of different people with different views,” which led to chronic dysfunction.

According to Azar, the country faces four key challenges: the recovery and reconstruction after the explosion, the criminal investigation into the explosion, the economic reform programme and financial restructuring, and the restructuring of the political system itself, “which is root cause of most of Lebanon’s current problems”.

“Most of the needed reforms will be politically and personally costly to the key political decision-makers behind any government that emerges,” he said. “Without a clear strategy for how Adib intends to address these challenges in the face of great political resistance, there is no reason to believe that Adib’s government will be any more successful than Diab’s.”

Adib, therefore, will find it difficult to push forward changes unless top politicians agree to them, even though many of these reforms go against their entrenched interests. 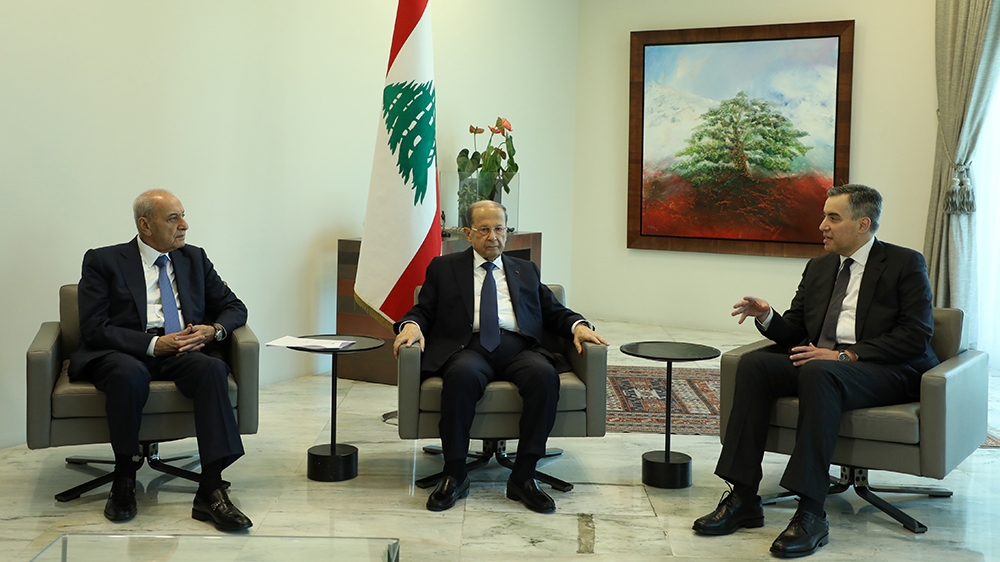 Lebanon’s President Aoun and Hezbollah’s powerful leader, Hasan Nasrallah, have both indicated they are ready to agree to a new political system in Lebanon, as long as it is based on consensus.

But Rima Majed, an assistant professor of sociology at the American University of Beirut who was involved in organising during Lebanon’s uprising, said it was clear Adib had been picked to maintain and protect the interests of the country’s ruling class.

“It still remains a republic of billionaires but its now run by their men, their advisers,” Majed told Al Jazeera. “It’s disturbing from a class aspect because they are reproducing the system and Adib is clearly coming to preserve the interests of those billionaires, be it Hariri, Mikati or [House Speaker Nabih] Berri.”

She said Adib’s government, once formed, would continue the “counter-revolution” that Diab’s government had begun, putting an end to any chance of a “political process that includes the uprising”.

Part of this is also due to circumstance: Local actors had become more empowered to take part in national politics during the uprising, but the Beirut blast has thrown the process almost-entirely to the international level.

“There’s something bigger being cooked up that the uprising is unable to grasp,” she said.

The Making of Rick Steves' Europe: Scrubbing the Script

The dynamic process of shaping a script includes a final scrubbing to ensure that every word earns its keep. For