Duch, the former Khmer Rouge commander who oversaw the mass murder of at least 14,000 Cambodians at the notorious Tuol Sleng prison, died on Wednesday. He was 77.

Kaing Guek Eav, who was better known by his alias Duch, was the first senior member of the Khmer Rouge to face trial for his role in a regime blamed for at least 1.7 million deaths in Cambodia between 1975 and 1979.

Duch died at 00:52 am (17:52 GMT on Tuesday) at the Khmer Soviet Friendship Hospital in Phnom Penh, Khmer Rouge tribunal spokesman Neth Pheaktra said. He gave no details of the cause, but Duch had been ill in recent years.

In 2010, a United Nations tribunal found him guilty of mass murder, torture and crimes against humanity at Tuol Sleng, a former high school in Phnom Penh, which is now a museum and a moving memorial to those who died.

He was given a life sentence two years later after his appeal – that he was just a junior official following orders – was rejected.

Bou Meng, a Cambodian survivor of Tuol Sleng prison, points at a picture of Duch, in this photo taken on January 31, 2012, in Phnom Penh [Tang Chhin Sothy/ AFP]

His death is “a reminder that justice is a long and difficult” process, said Youk Chhang, director of the Documentation Center of Cambodia, which conducts research on the Khmer Rouge regime.

“Perhaps it can bring some satisfaction to the living, and the fallen can now rest in peace,” Youk told AFP news agency.

At Tuol Sleng, codenamed “S-21”, detainees were tortured by Khmer Rouge guards, many of them teenagers because Duch saw them as “like a blank piece of paper” and easily indoctrinated.

The guards sought confessions to non-existent crimes and were instructed to “smash to bits” traitors and counter-revolutionaries. For the Khmer Rouge, that could mean anyone from school teachers to children, to pregnant women and “intellectuals” identified simply because they wore glasses.

Duch – himself a former maths teacher – had an obsessive eye for detail and kept his school-turned-jail meticulously organised. He maintained a huge archive of photos, confessions and other documents with which prosecutors were able to trace the harrowing final months of thousands of inmates.

“The crimes committed by the accused at S-21 are rarely matched in modern history in terms of their combined barbarity, scope, duration, premeditation and callousness,” International Co-prosecutor Bill Smith told the trial, at one point.

Duch – by the time of his trial a born-again Christian – expressed regret for his crimes.

“I would like to acknowledge my legal responsibility for all the crimes that happened at S-21, especially the torture and execution of people there,” he told the court in March 2009. 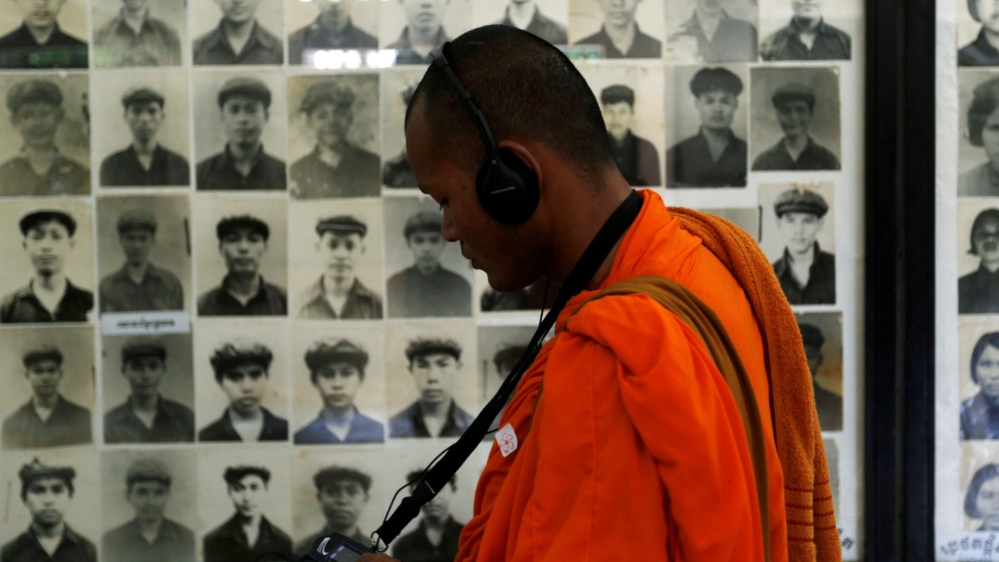 At S-21, new prisoners had their mugshots taken, and hundreds are now on display [File: Samrang Pring/ Reuters] 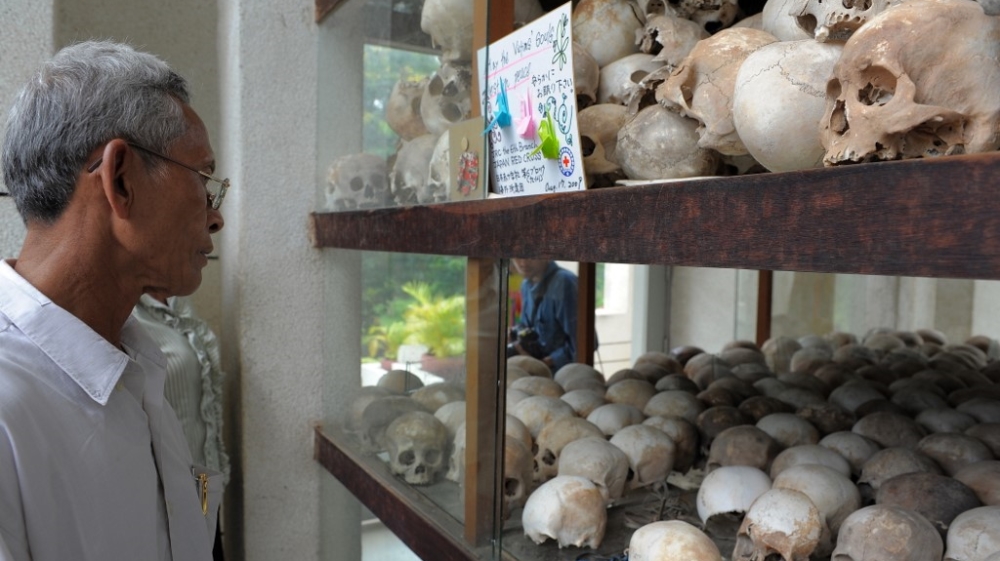 Skulls of those who died in Cambodia’s “Killing Fields” during Khmer Rouge rule in the 1970s [File: Tang Chhin Sothy / AFP]

Duch joined the Maoist movement led by Pol Pot in 1967 and was put in charge of Tuol Sleng after the regime seized power in 1975.

In their quest to build an agrarian utopia and rewrite Cambodian history the Khmer Rouge cleared cities and forced people into the countryside where they died from disease, starvation, overwork or execution. The brutality came to an end in 1979 when Vietnamese forces overthrew the regime in 1979, but Duch slipped away from S-21 and disappeared. Many assumed he had died.

But in 1999, Nic Dunlop, a British photographer visiting a remote village near the Cambodia-Thai border recognised him, setting in motion a chain of events that eventually led to his arrest.

In an account of Duch and his atrocities, “The Lost Executioner”, Dunlop wrote that the former commander’s control in S-21 “was total”.

“Nothing in the former schoolhouse took place without Duch’s approval,” he wrote. “Not until you walk through the empty corridors of Tuol Sleng does Stalin’s idiom that one death is a tragedy – a million a statistic, take on a terrifying potency.”

At S-21, new prisoners had their mugshots taken, and hundreds of those pictures now line the walls.

Norng Chan Phal, one of the few people to have survived S-21, was a boy when he and his parents were sent to Duch’s prison and interrogated on suspicion of having links to Vietnam, considered an enemy by the Khmer Rouge.

His parents were tortured and killed but Chan Phal survived to give testimony at Duch’s trial in 2010.

“He apologised. But justice is not complete”.

The work of the tribunal -a hybrid court of international and Cambodian judges – was tainted by its limited scope, the age of its defendants and accusations of political meddling.

It recorded only three convictions – including Duch’s.

‘US can impose neither negotiations nor war’ on Iran, Rouhani tells UN General Assembly

Pakistan achieves compliant rating in 35 out of 40 FATF recommendations