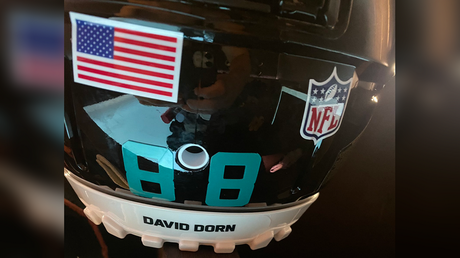 Jaguars’ tight end Tyler Eifert displayed the name of retired police captain David Dorn, who was shot to death amid riots in St. Louis, on the back of his helmet, as his side beat Colts in the first win of the season.

“Great win to start the season. Love being a part of this new team and community! It was an honor wearing David Dorns name on my helmet today! #DUUUVAL,” Eifert tweeted after the Jaguars pulled off a surprise victory over Indianapolis Colts, 27-20.

Before the season kicked off, Eifert repeatedly spoke of his intention to pay respect to the slain police veteran, who was killed on June 2 when trying to protect a friend’s pawnshop from looters who wrought havoc in the city as initially peaceful protests against police brutality turned violent.

A tribute to the officer was paid by US President Donald Trump, while Dorn’s widow and fellow police officer Ann Dorn addressed the Republican National Convention (RNC) last month, urging Americans to “remember that every life is precious.”

As protests sparked by the police killing of unarmed black man George Floyed in late May swept across the nation, the NFL announced in June that it would allow players to put the names of “systemic racism, victims of police brutality, and social justice heroes” such as Floyd or Breonna Taylor on their decals.

The list of the names, approved by the league also includes that of Dorn, although he arguably does not fall into any of the designated categories.