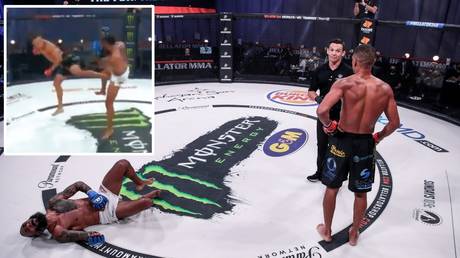 MMA fighter Peter Stanonik won’t soon forget his fight with kickboxing legend Raymond Daniels after he was left moaning in pain on the canvas after receiving one of the worst low-blows in recent memory at Bellator 245 on Friday.

Stanonik had just recovered from a groin strike when, just seconds later, Daniels attempted a spinning attack, with his heel once again landing flush below the belt.

The illegal shot was made worse given that Stanonik was throwing a kick of his own at the time, with his extended leg almost forming a target for Daniels to make contact with.

When the strike landed it was obvious that Stanonik was in immediate discomfort. Forced onto all fours, the 32-year-old could do little more than crawl around the cage while sobbing to himself and occasionally punching the canvas in frustration.

He also spat out his mouthpiece and was seen drooling inside the cage, with his audible discomfort emphasized by the absence of fans in attendance.

They gotta give my man who is LITERALLY weeping on the ground after being BLASTED in the dick twice in a row the win there… Fuck a no-contest, Raymond Daniels should get the L, that’s not even right

“He’s not going to recover from this one,” the Bellator commentary team announced over Stanonik’s wails.

“That was so clear to the groin,” former referee John McCarthy said. “That was horrible.

“Based upon what Jason (Herzog, referee) saw, although Raymond Daniels did not intend for that second kick to land as a foul, he is responsible for the techniques he throws.”

The illegal kick came almost immediately after Stanonik had used a full five minute period to recover from another Daniels low-blow. The second one appears to have caused more damage, however, leading to referee Herzog calling off the fight.

The contest was subsequently declared a no-contest after the offending shot was declared an “unintentional groin strike.”

White professor who pretended to be Black resigns from GWU