Gaza City – The threat of a new Gaza war continues to rise as Palestinians demand an end to the devastating 13-year-long blockade and Israel tightens the screws on Gaza’s economy while targeting Hamas positions.

Israeli warplanes and tanks bombed Hamas military sites early on Tuesday in response to the incendiary balloons launched from Gaza towards Israel’s south, according to an Israeli army statement.

It was the 15th day in a row that Israel launched attacks against Hamas’s infrastructure and agricultural land in the Gaza Strip. Gaza’s military factions did not respond on Tuesday, although they previously launched rockets towards Israel after attacks last week.

No serious injuries were reported on either side.

The current escalation between Palestinian factions in the Gaza Strip and Israel was caused by the launching of incendiary balloons by Palestinians into southern Israel in the past two weeks as a way to pressure Israel to lift its crippling blockade imposed in 2007. The rigged balloons and kites often start blazes on farms in Israel.

Over the past two years, following the momentum of the Great March of Return protests, multiple deals were reached between Palestinian factions in Gaza and Israel with the mediation of Egypt, Qatar, and the United Nations.

Hamas, which governs Gaza, was to provide security along the demarcation dividing the Palestinians and Israelis, in return for Israel’s alleviation of the blockade.

But Palestinian leaders in Gaza accused Israel of continuing to renege on implementing its side of the bargain.

According to local Palestinian media reports, Israel has failed to extend Gaza’s allowed fishing zone to 20 nautical miles, allow the construction of a new power line into the Gaza Strip, permit Gaza’s power plant to operate on natural gas, and facilitate the movement of goods, including the entry of 1,200 trucks a day, through the Karem Abu Salem (known as Kerem Shalom to Israelis) crossing.

In response to the launching of incendiary balloons, Israel has taken punitive measures against Gaza by restricting goods coming through the crossing, fully closing the sea to Gaza’s fishermen, and halting fuel supplies, causing the territory’s sole power plant to shut down with electricity reduced to four hours a day.

“The current escalation is a confrontation between the Palestinian factions who are fighting to lift the blockade on Gaza, and Israel who is fighting twice as hard to keep the blockade in place,” political analyst Husam al-Dajani told Al Jazeera. 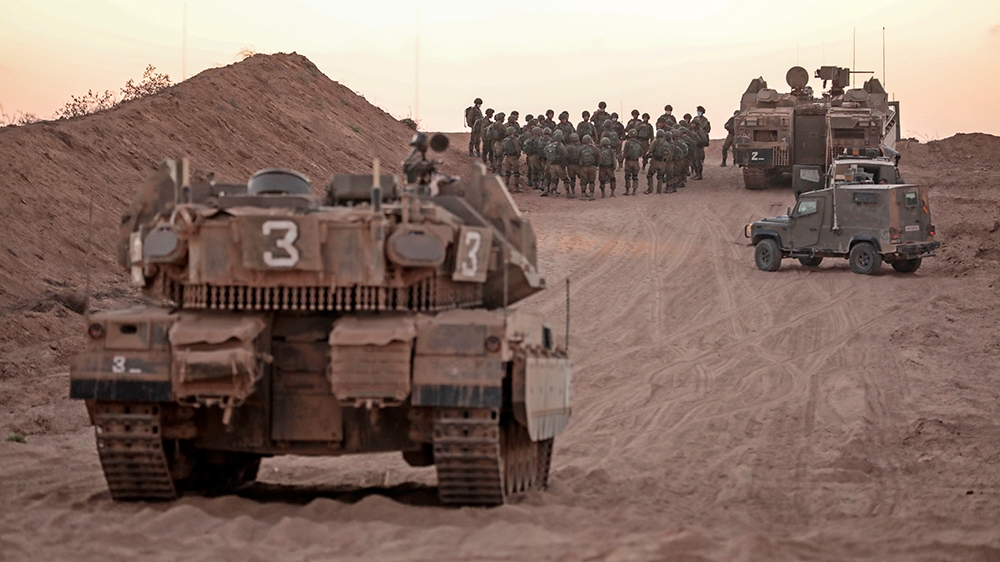 “Whenever the Palestinians protest and demand that the blockade be lifted or even alleviated, Israel responds by further tightening the blockade and further exacerbating the crises in Gaza,” he added.

“By doing this, Israel is adding more fuel to the fire and directing the situation towards further escalation and instability. You solve a problem by addressing its cause, not by exacerbating the cause.”

Al-Dajani said the standoff could lead to another full-blown military confrontation.

“And now Israel is threatening Gaza with another military operation, it’s astonishing that Israel wouldn’t even consider easing its blockade on Gaza and would contemplate any other alternative,” he said.

“The Palestinian people in the Gaza Strip are living under unbearably miserable and grim conditions … Gaza’s factions have told the mediators that Gaza will not remain silent under these tragic conditions.”

Gaza’s armed groups and Israeli forces are now on high alert and gearing up for further confrontation. Hamas officials say this time they will not cooperate until Israel fully lifts its blockade on Gaza.

In preparation for an escalation, the Israeli army on Sunday reinforced the deployment of Iron Dome missile batteries in the south.

Meanwhile, incendiary-balloon units released a statement on Saturday saying: “We will not retreat and will not rest until the demands of our people are met and the blockade is lifted.”

In Gaza, Palestinian factions are united behind the demand for Israel to lift the blockade.

“We will not allow the enemy to continue the unjust siege on our people … It is the right of our people to express, by all appropriate means, their rejection of the blockade,” it said.

Israeli Prime Minister Benjamin Netanyahu has threatened to assassinate Hamas and Islamic Jihad leaders if the fire balloons continue, and suggested another war on Gaza is possible.

Gaza has been under an Israeli blockade since 2007 when Hamas took control of the Gaza Strip.

The siege has inflicted severe hardship on residents. The poverty rate among Gaza’s population has reached 53 percent, while “extreme poverty” stands at 33.8 percent, according to statistics by the Palestinian Central Bureau of Statistics (PCBS).

About 68 percent of families do not have enough to eat, while 80 percent of Gazans are dependent on aid. The area’s unemployment rate stands at 45.1 percent, according to PCBS.

“The Israeli occupation wants to keep the blockade in place on the Gaza Strip,” said Talal Abu Zarifa, senior member of the Democratic Front for the Liberation of Palestine.

“Israel wants to enforce calm in Gaza without lifting the siege, and the Palestinians reject that equation.”

Abu Zarifa added: “When the occupation closes the crossings and prevents fishing at sea, these acts constitute collective punishment and this is against international and humanitarian law.”

He noted “the occupation” bears responsibility for everything that happens in the Gaza Strip.

The international community must pressure Israel to lift the blockade and stop all forms of collective punishment on the Palestinian people, Abu Zarifa added.

Naim said the suffering of Gazans has become “a forgotten issue”.

“In light of that, the Palestinian people and Palestinian factions have no other option other than to take the initiative and raise their voice against this deteriorating humanitarian situation, and say we will not accept that we die in silence,” he said.