Names marked with an asterisk* have been changed to protect identities.

Police on the Greek island of Lesbos have launched an operation to rehouse thousands of refugees and migrants who have been sleeping rough after their camp was destroyed by fire.

Officers on Thursday morning woke people in their tents to take them to a temporary centre that was hastily set up after Europe’s largest camp for asylum seekers at Moria burned down last week.

The new Kara Tepe camp, near the island’s main town Mytilene, was made on a former military firing range and is close to the remains of the Moria site.

But many have refused to go, fearing living conditions would be as bad or worse than at Moria, which was notoriously unsafe, and worried they would be left waiting for months to have their requests for asylum processed and transferred to the Greek mainland or another European country.

Riot police and police vans were parked on either side of a street where thousands who fled the Moria camp have been living.

Quietly, with the sounds of children crying and under an already hot sun, people folded their blankets, picked up bags containing whatever belongings they had saved from the fire and dismantled their tents. 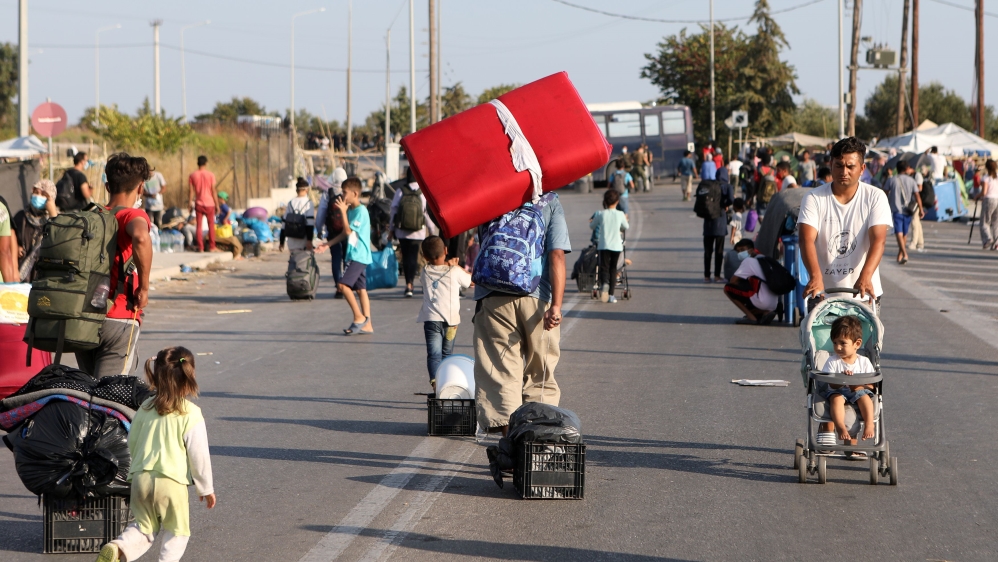 More than 12,000 people including entire families with elderly people and newborns were left homeless when fire tore through the overcrowded and unsanitary Moria camp [Elias Marcou/Reuters]

Women and children with bundles on their backs were seen gathering by a barricade police had set up on the road.

Some mothers pushed their babies in prams up the road as other refugees took shelter from the morning sun in the shade of a large building, or washed with water bottles on the roadside.

“The aim is to safeguard public health,” police spokesman Theodoros Chronopoulos told AFP news agency, confirming that “an operation is under way” which “responds to humanitarian aims.”

But Doctors Without Borders (MSF), which opened an emergency clinic in the area, said it was barred from accessing its facility during the night, as rumours of the police operation spread.

“A police operation is under way to take refugees to the new camp. This should not prevent medical aid,” MSF complained on Twitter.

More than 12,000 people including entire families with elderly and newborns were left homeless when fire tore through the overcrowded and unsanitary Moria camp – built five years ago at the height of Europe’s refugee crisis – on the night of September 8.

Thousands have been sleeping under tarpaulins or tents at roadsides and in the car parks of closed supermarkets since the blaze.

Late Wednesday, around 1,000 tents, each able to accommodate between eight and 10 people, had been erected at the new site. 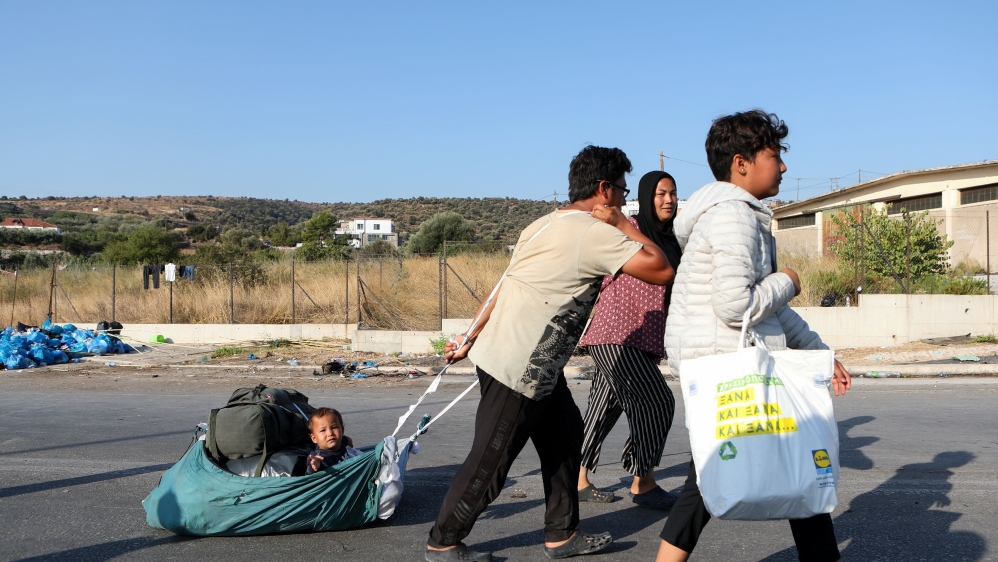 The atmosphere on Thursday morning was calm, with people exhausted from spending a week on the street. Families collected their belongings, some pushing them in large bins or supermarket trolleys, in preparation for the move.

At the start of the operation, single men were not allowed to enter the new camp.

Farhad*, is 20 and alone in Greece, having fled war in Afghanistan.

Even if he was allowed in, he told Al Jazeera he does not want to enter Kara Tepe.

“I’ve been in Moria for nine months and again, if we enter the camp, [maybe] it will be for a year, too. I’m losing my youth just waiting.”

Other families have accepted their new reality.

“We hear there is food and water there,” said Abdul*, who has five children.

His family is tired of living on the street waiting for help that never seems to arrive and believes there is no other option.

Six young Afghans have been arrested in connection with the incident, with four of them brought before a Lesbos magistrate on Wednesday. 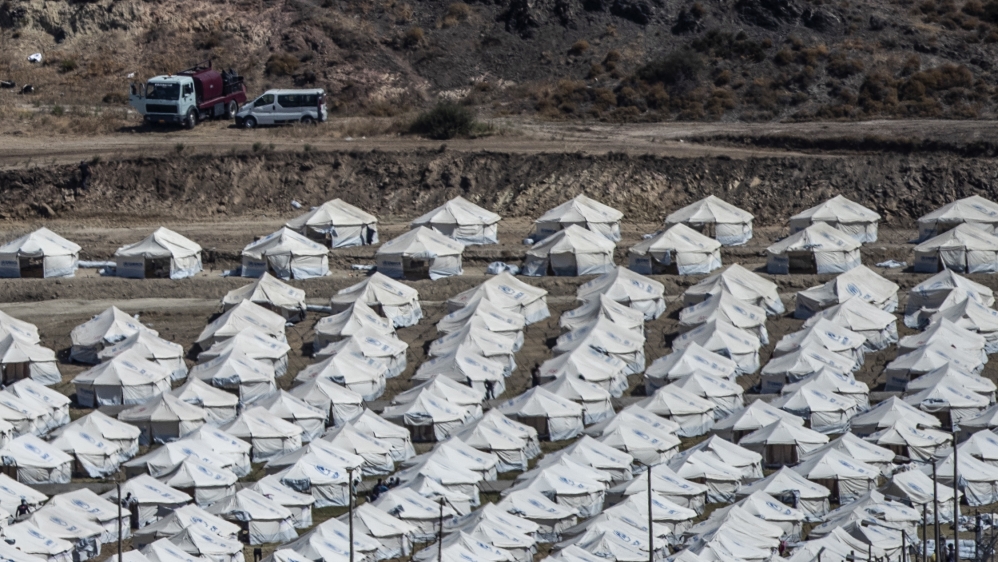 A general view of the temporary camp for refugees and migrants near Mytilene town, on the northeastern island of Lesbos, Greece, on September 13 [Petros Giannakouris/The Associated Press]

Medical tents were to be set up, and two quarantine zones were planned for the several dozen people who have tested positive for coronavirus.

“We have seen a lot of people come in hazmat suits trying to talk to people, to convince them to go to the camps. People are moving. Not everyone is moving, but people are moving,” said Al Jazeera’s Stefanie Dekker, reporting from Lesbos.

“A lot of people we have been speaking to this morning still don’t want to go. They say they are hearing the situation is bad, they are are going to be stuck in there, there are calling it a jail.

“Certainly the message from the authorities is that they have to move to the camp, and if they are not going to do so willingly … they will use the police to move people forcefully.”

The Greek migration ministry said on Tuesday that around 1,200 people had entered the new camp.

Aid groups said a few hundred more arrived on Wednesday, forced by exhaustion after sleeping rough under a hot sun for a week.

The UN refugee agency has urged Greece to speed up asylum processes on Lesbos.

“The idea is not that people remain forever on the island of Lesbos, but that processes are accelerated so that people can leave gradually and in an orderly way” to the capital Athens or elsewhere on the mainland, the UN agency’s chief in Greece Philippe Leclerc told reporters.

Meanwhile, anger is growing among local Lesbos residents, who complain overcrowding on the island is affecting its tourism possibilities.

“We have two human dramas here. Unfortunately, it is the drama of the migrants living here that is constantly talked about, and never the locals who have gone through a very hard time, since 2015, and are very frustrated. These people should be put in a controlled camp and far away from the local population,” Moria village resident Stratis Kokkinellis told Al Jazeera.

Greece’s police minister Michalis Chrysochoidis this week said that half the refugees and migrants on Lesbos should be able to leave by Christmas and “the rest by Easter”.

With reporting by Katy Fallon in Lesbos. 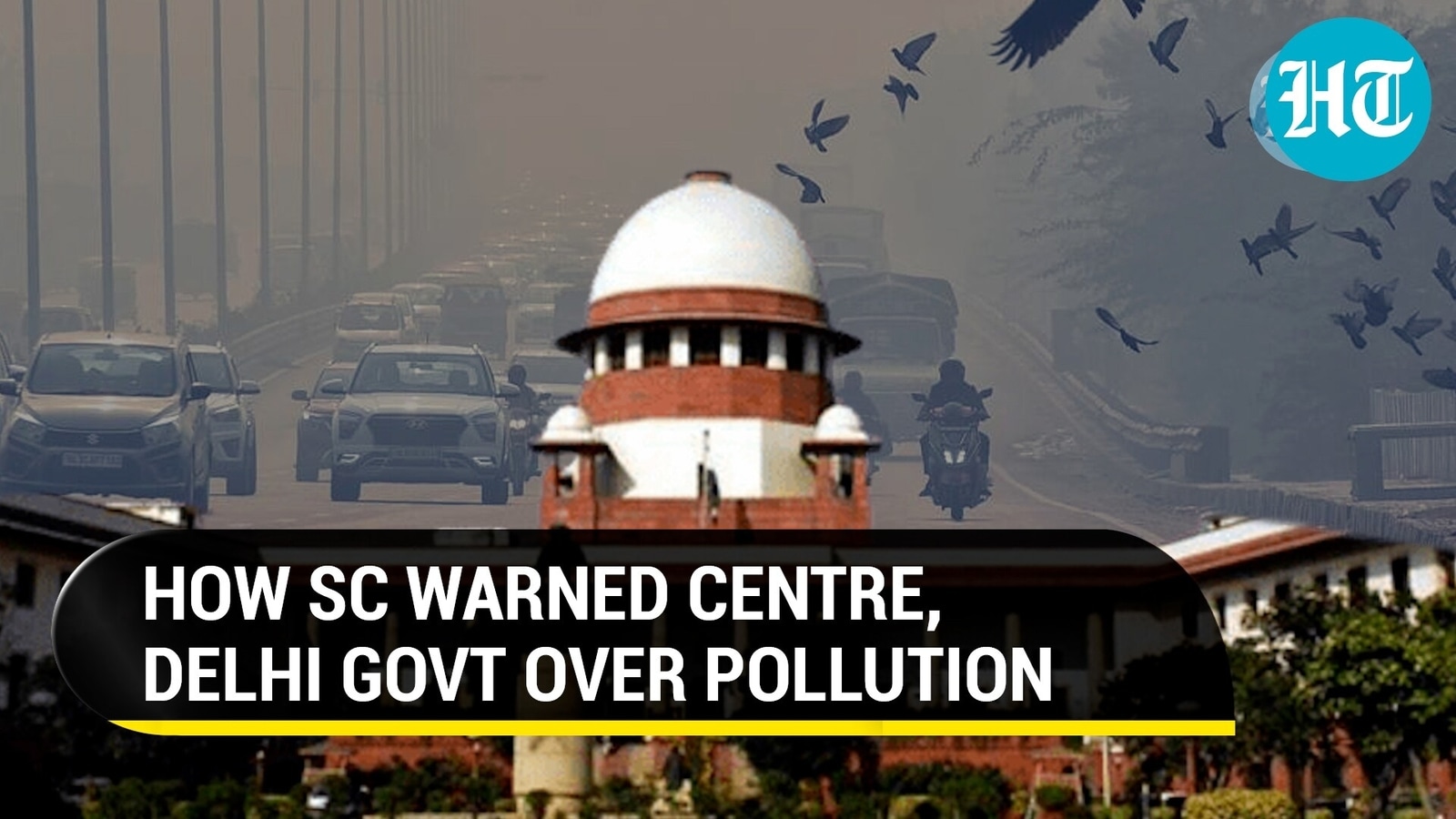 I know the game Nawaz is playing: Imran Khan