President Arif Alvi has said the government has secured achievements on various fronts specially economy, social and human development and foreign policy to take the country towards a prosperous and shining future.

Addressing the joint sitting of the Parliament at the Parliament House in Islamabad on Monday at the advent of 4th Parliamentary Year, he said that despite the negative impact of Covid-19, the country’s economy has been put on positive trajectory.

President Arif Ali said that Pakistan Stock Exchange has broken all previous records and emerged as the world’s fourth best performing markets. He said that according to a survey of overseas investors, chamber of commerce and industry, the Business Confidence Index of Pakistan improved by massive 60 percent.

The President was also appreciative for the steps taken by the government to meet the action plan of Financial Action Task Force (FATF). 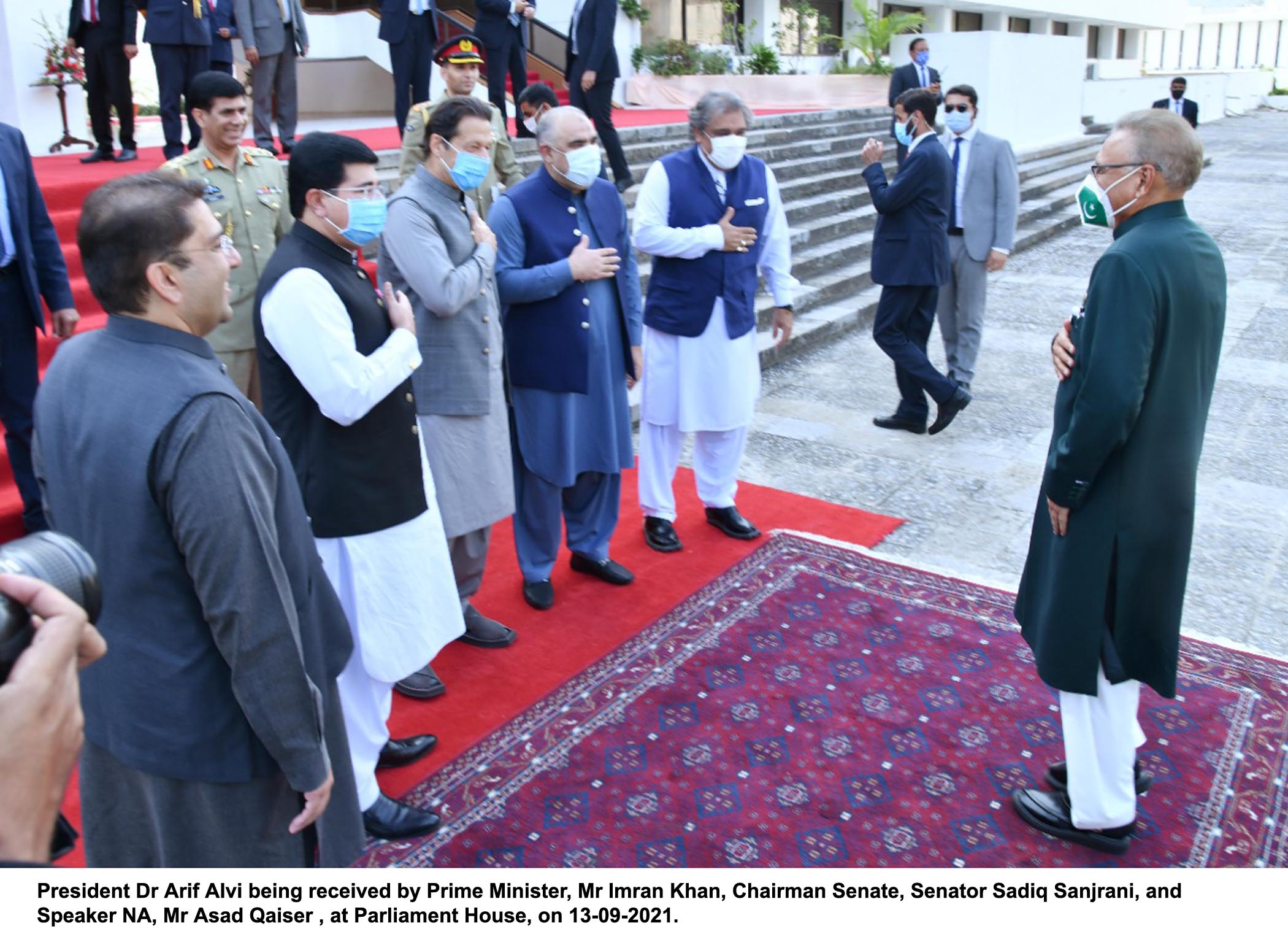 The President said that the government also gave a comprehensive package to the construction industry in order to uplift the weak segments of the society. He mentioned that people are being providing easy loans to build their own Houses.  He said these achievements on the economic front are a reality which the opposition will have to accept.

Dr Arif Alvi said that agriculture sector witnessed a growth of 2.7 percent while exports in the IT sector touch the mark of 2.12 billion dollars.  He said various programmes have been launched to provide skill training to youth. He said 1.7 million youth has so far been provided vocational training in this regard.

The President said the government has been implementing a number of social security initiatives under Ehsaas programme for social economic development of people.  He said 208 billion rupees have been allocated for this programme that will benefit about thirty percent of the population. He said Ehsaas Nashonuma, Waseela Taleem, Ehsaas Kafalat, Ehsaas Scholarship, Emergency Cash, Langarkhana and Koi Bhooka Na Soye programmes would significantly contribute to social economic development across the country.

The President said the youth are being provided easy loans for starting their own business. He said that 100 billion rupees have been earmarked for this programme and fifteen billion rupees have so far been distributed among the eligible candidates.

Dr Arif Alvi said Pakistan is heading towards Universal Health coverage under the government’s Sehat Sahulat Program.   He said eighteen million families are currently benefiting from this programme and hopefully the health card scheme will soon reach every corner of the country. He underlined the need for giving special importance to telemedicine as it would decrease burden on hospitals.

The President also emphasised on family planning and breast feeding so that health of child and mother can be protective. He said also urged media and Ulema to play their role in creating awareness in this regard.  He also called upon the government to increase funding for this purpose.

Talking about the education sector, Dr. Arif Alvi said the government has introduced a single national curriculum and announced massive scholarship for students to promote education in the country.  He said the uniform syllabus is a step towards building a united nation. He said differently able people have been exempted from tuition and hostel fee by the Higher Education Commission, enabling them to become a vibrant and productive segment of the society. He said the government has paid special focus on safeguarding the rights of differently able people and women.

Regarding protections of women rights, the President said the government has not only made effective legislation but also took administrative measures to prevent incidents of sexual harassment against women and children.  He appreciated the government for undertaking legislation to protect women’s hereditary rights.

Stressing the need for electoral reforms for promotion of democracy in the country, the President said use of electronic voting machines will help bring transparency in electoral process. He said since it is a matter of destiny of Pakistan, there should not be any politics on the issue of electoral reforms.  He said all the political parties should extend their full cooperation to give right of vote to overseas Pakistanis.

On the foreign policy front, President Arif Alvi regretted that India is committing genocide of innocent Kashmiri people over the last many decades. He asked India to end its blatant human rights violations in Indian illegally occupied Jammu and Kashmir and fulfil the promise of granting right of self-determination to the Kashmiri people.  He said Pakistan stands by its principled position on Kashmir dispute. He thanked the friendly countries such as China, Turkey, Iran and Azerbaijan for supporting Pakistan’s stance on the lingering dispute.

He said the Prime Minister called himself the ambassador of Kashmir and raised their plight at every international forum.

The President said the Prime Minister has effectively exposed the true face of India before the world.  He said India is abetting terrorism in Pakistan.  He said the theft of uranium and its buying and selling in the open market in India is a dangerous event. He regretted the silence of international media on Indian administration’s incompetence.

He said it has always been the endeavour of Pakistan to maintain cordial relations with its neighbours. He, however, lamented that India never reciprocated to Pakistan’s positive gesture. He said Pakistan gave a befitting response to the Indian aggression in February 2019. We shot down their aircraft and released their pilot as a goodwill gesture.

The President urged the international community to provide assistance to the Afghans to avert humanitarian crises there.

He said peace in Afghanistan will indeed be very beneficial for the region. He said some forces especially India wants to sabotage the CPEC project. He made it clear that India failed in its attempt in the past and will not succeed in its plots in future as well. He said that Pakistan China friendship is destined to rise.

The President said that Pakistan gives immense importance to its relation with China and wants to further strengthen them. He said China has paid a pivotal role in the socio-economic development of Pakistan.

Highlighting the strengths of the nation including its capability to build nuclear weapons and philanthropy, President Arif Alvi said Pakistan successfully defeated terrorism as a result of sacrifices of the security forces. He asked the people to be cognizant of the threats posed by fake news and slander campaign.  He said we also need to do proper coaching of our youth to take forward the country.

The Joint session has now been prorogued.

Trump to speak at ‘Save America’ rally outside White House, warns ‘terrorist’ Antifa to stay out of DC

US invites Pakistan to climate summit after initial snub