The government on Monday called upon the members of the Election Commission of Pakistan (ECP) to resign, saying the body had “completely failed” in making this month’s Senate elections transparent.

Addressing a press conference in Islamabad, federal education minister Shafqat Mehmood said despite evidence of horse-trading, the ECP had failed to ensure the Senate polls were held transparently, with the result that all political parties were unhappy with the commission.

In such a scenario, “there is no option other than the Election Commission cannot continue functioning in its current state. ECP [members] should resign en masse,” said Mehmood, who was accompanied by Information Minister Shibli Faraz and Science and Technology Minister Fawad Chaudhry.

“Everybody is criticising [the ECP]. Is there anyone who’s saying the election was conducted properly?” the minister asked. He said this reinforced Prime Minister Imran Khan’s stance that a manner should be adopted to end the buying and selling of votes in order to make the elections transparent.

He said the premier had always advocated for the use of open ballot in the Senate elections, while the PTI was the only party that took action against its members who had allegedly sold their votes in the 2018 polls for the upper house.

But Mehmood said the SC had also stated that it was the ECP’s responsibility to conduct free and fair elections that were not marred by corruption.

He recalled that the PTI subsequently approached the ECP with a request that it make ballots traceable while maintaining their secrecy in light of the SC decision. “But sadly it was rejected [and] a committee was formed to take the measure in future elections,” he said.

According to the minister, it was due to the ECP’s lack of action that “corrupt practices” took place in the election on the Senate general seat from Islamabad — which opposition candidate Yousuf Raza Gilani won despite the government having a majority in the National Assembly.

Mehmood said all political parties, including the ruling PTI, had lost confidence in the ECP.

He emphasised that the current ECP could not continue if the political parties and people of the country did not have confidence in it or saw its decisions with suspicion. After the current members’ resignation, he said, new ECP members should be appointed under whom the commission would conduct transparent elections.

“We want the ECP to play the role of a neutral umpire, which it is not doing,” he said, adding that although the Supreme Court had given an “opportunity” to the ECP which it could have utilised and taken measures to make the Senate polls fair, the body did not do so and “hurt our democracy”.

“Therefore, the chief election commissioner and his members should resign […] so that the parliament gets the chance to form a new ECP which everyone trusts.”

Answering a question, Mehmood said the demand for resignation was a “political response”, and the government had no intention of filing a reference in this regard.

The ECP and the PTI-led government have been on a collision course since before the Senate elections, after the commission decided to hold the March 3 polls through secret ballot due to what it called “time constraints”.

After key PTI candidate Hafeez Shaikh suffered defeat in the election, Prime Minister Imran Khan in a televised address to the nation accused the ECP of “damaging democracy” and criticised the body over use of secret ballot for polling.

Responding to the premier, the ECP chided the PTI for being upset over the election result and asked the party’s leadership to stop mudslinging against institutions and accept its defeat.

However, the government upped the ante against the commission, with members of the prime minister’s cabinet saying at a press conference that the ECP should not be “saddened” but “ashamed” at having allegedly failed to hold fair and transparent Senate elections. 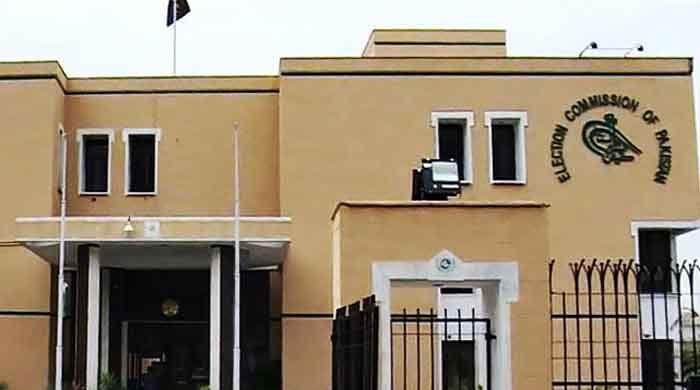