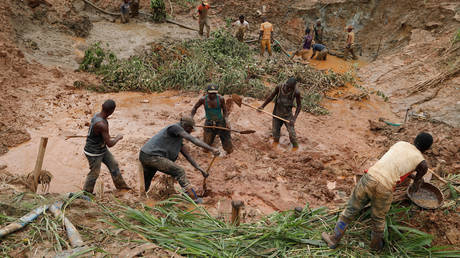 At least 50 people are presumed dead after an artisanal gold mine collapsed near Kamituga in the Democratic Republic of Congo. The mine was the second such facility to collapse in a week.

The mine collapsed on Friday afternoon following heavy rain, a local mining NGO told Reuters. Kamituga is located in the mineral-rich Maniema Province, one of the country’s most important gold mining regions.

“Several miners were in the shaft, which was covered and no one could get out. We are talking about fifty young people,” NGO spokeswoman Emiliane Itongwa told the news agency.

Mining is a notoriously dangerous occupation. Another artisan mine collapsed in Maniema last week, killing three people and leaving one injured. While the term may imply craftsmanship and quality, an ‘artisan’ mine refers to a small operation that relies on rudimentary methods to extract gold. These mines are often illegal, use toxic chemicals to recover metal and gems, and draw workers from economically deprived communities.

Friday’s incident marks the deadliest mine collapse in Maniema in recent years. A collapse last October made international news when two dozen workers were killed, among them pregnant women and children.

Sounds far-fetched: Researchers figure out how to clone keys from the noise they make in locks