Gaza City – For the past two weeks, a group of seven Palestinian men have camped close to the buffer zone separating the Gaza Strip from Israel in the early hours before dawn.

But this is no ordinary camping trip. Among their supplies are gas cylinders, small inflammable cubes, balloons and Guy Fawkes masks, which they wear to conceal their identity.

The Palestinians call themselves the Barq (Lightning) Unit – one of several groups involved in floating “fire” balloons and kites into Israel.

Hiding between the bushes and olive trees, the men fill the balloons with helium, group them in a bundle, and then attach a small incendiary object to their tail.

Once the wind direction is right, they launch the objects discreetly in the direction of empty areas within Israel that are close to the buffer-zone fence.

The balloons, which Israel has described as “arson attacks”, have been causing large fires on some agricultural land.

While no Israelis have been hurt, the airborne devices have prompted Israel to bombard the Gaza Strip for 10 consecutive days – targeting Hamas field training facilities and monitoring points without causing any Palestinian casualties.

“We came here to send a fiery message to the Israeli occupation that we in the Gaza Strip can no longer tolerate the blockade that’s been taking place for 13 years,” Abu Yousef, the spokesman of the Barq Unit, told Al Jazeera.

“We would like to send a message that we deserve a decent life to our families and loved ones,” the 24-year-old added.

The most senior group member, who goes by the nom de guerre of Abu Obaida, said they turned to these tools to challenge the blockade because they increasingly feel “nobody is looking at Gaza” and resorted to this tactic seeking to “alleviate the miserable situation on Gaza”.

“The world is looking the other way,” the 35-year-old father of five said. “We don’t have any enmity with the Jewish people. Our battle is against their government that has been besieging us for 13 years.”

In addition to the nightly air raids on the blockaded coastal enclave, Israel has undertaken a series of punitive measures it says is a response to the incendiary balloons.

The following day, Gaza’s sole power plant halted its services as a result of Israel cutting Gaza’s fuel imports on Thursday, which brought down the city’s electricity intake from eight-12 hours to only three-four hours per day.

Despite the increased measures of collective punishment on the Gaza Strip, the Lightning Unit is adamant it will continue its activities, which members say is a means of pressuring Israel to lift the devastating blockade on Gaza.

Hamas, the rulers of Gaza, generally tolerate the fire balloon floaters despite the violent reprisals by Israel.

“The Palestinian people have a right to resist the Israeli occupation and to raise their voices in any way against the blockade of the Gaza Strip,” Hamas official Bassem Naim told Al Jazeera.

He accused Israel of ignoring agreements mediated by Egypt, Qatar, and the United Nations.

“The result is that the people in Gaza are now living in unprecedented miserable conditions,” said Naim. “This is what has pushed some young people to undertake popular resistance actions such as the incendiary balloons, because all other methods to draw attention to what is happening in the Gaza Strip have failed to result in any change.”

According to the United Nations, Gaza’s blockade was expected to render the besieged city uninhabitable by 2020. The enclave suffers from a severe scarcity of drinkable water, where water contamination has reached 97 percent.

Nearly 80 percent of Gaza’s population receives some kind of aid, according to the World Bank, while nearly 53 percent has fallen below the poverty line.

The harsh economic conditions have driven the Barq Unit to challenge the status quo, the members said. While they all have university degrees, they are all unemployed – as part of what the World Bank has described as the highest unemployment rate – 45.5 percent – in the world.

“My children deserve a decent and dignified life. I’m here today because when I look into their eyes, I can only see that I cannot provide for them.”

Abu Yousef said he cannot afford to buy the basic necessities for their school, and had to borrow used uniforms from neighbours.

“We are not terrorists as Israel claims,” Abu Obaida said. “We don’t want to burn anything or hurt anybody. I recently graduated in public relations and marketing with top marks but couldn’t find a job afterwards.

“We deserve to have employment opportunities and electricity. My children deserve to find food on the table,” he added.

The fire-balloon squads in Gaza were all participants in the “Great March of Return” rallies that began in 2018, when Palestinian refugees gathered peacefully near the fence with Israel in an attempt to return to their pre-1948 homes.

But after Israel brutally put down the demonstrations, the marchers sought other ways to highlight the plight of Gazans.

The Barq Unit stressed its activities are a legitimate response to Israel’s crippling blockade.

“We’re not asking for astronomical demands but basic rights,” Abu Obaida said. “We will continue to use the balloons and kites until Israel complies with our legitimate right to lead a normal life and provide for ourselves.”

Another member, Abu Hamza, chimed in: “Our message to the world is to see Gaza for what it is. It is an occupied territory where two million people are living under a suffocating siege. Israel has no right to maintain this situation.” 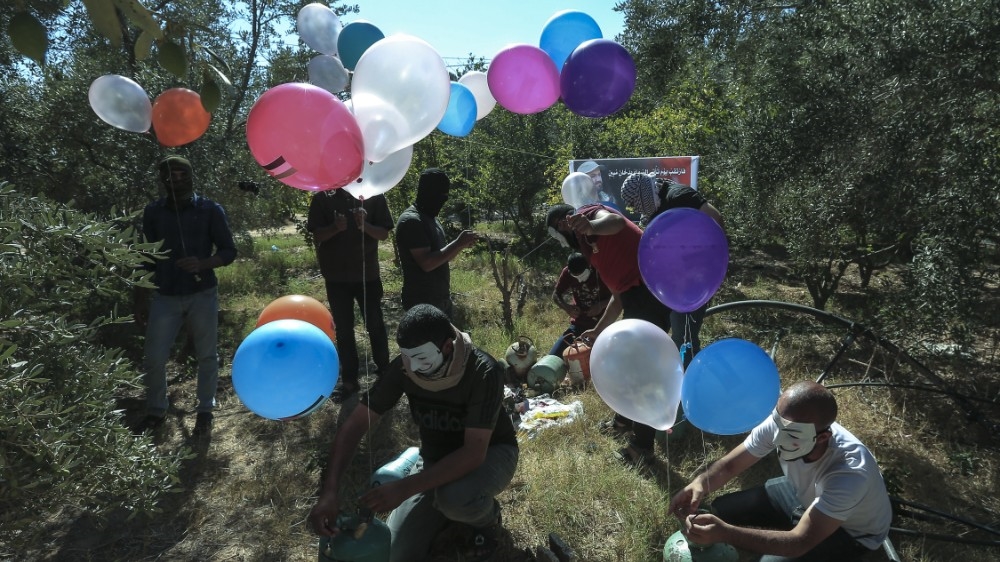 The Barq Unit recognises its activities come with enormous risks to their lives.

“The danger we’re facing every day is that the occupation is shooting live fire towards us,” Abu Yousef said. “The skies above us are always full of drones. Of course we feel fear, but life as it is in Gaza is more terrible.”

He said all Gazans want is a decent life with no blockade, adding, “Until then, Gaza will remain a thorn in the occupation’s throat.”

“Whoever thinks that we will continue to accept the bleak life that is forced upon us in Gaza is delusional,” said Abu Yousef.

Former cop ‘attempts to rob’ another on-duty cop, dies in exchange of fire