French President Emmanuel Macron has announced France will boost its military presence in the eastern Mediterranean amid an escalating standoff between Greece and Turkey over oil and gas exploration in disputed waters.

In a Twitter post on Wednesday, Macron called the situation in the eastern Mediterranean “worrying”, and urged Turkey to stop its “unilateral” prospecting and “allow a peaceful dialogue” between the neighbouring NATO members.

“I have decided to temporarily reinforce the French military presence in the eastern Mediterranean in the coming days, in cooperation with European partners, including Greece,” Macron said.

Turkey and Greece, NATO allies, vehemently disagree over overlapping claims to hydrocarbon resources in the region based on conflicting views on the extent of their continental shelves in waters dotted with mostly Greek islands. The gas-rich waters of the region is also a frequent source of dispute between Turkey, Cyprus and Israel.

The Ankara-Athens dispute escalated this week when Turkey dispatched the research ship Oruc Reis accompanied by Turkish naval vessels off the Greek island of Kastellorizo.

Greece also deployed warships to monitor the vessel, which is currently sailing west of Cyprus.

Macron’s office, in a statement, said France’s increased military presence in the region was aimed at monitoring the situation and marked Paris’s “determination to uphold international law”.

Last month, the French leader called for EU sanctions against Turkey for what he described as “violations” of Greek and Cypriot sovereignty over their territorial waters. Relations between Paris and Ankara have also frayed over the conflict in Libya.

‘Risk of an accident’

Meanwhile, Mitsotakis, in a statement earlier on Wednesday, urged Turkey to show “sense” and warned that the showdown in the eastern Mediterranean could lead to a military accident.

“We are vigilantly looking forward to sense prevailing, at last, in our neighbouring country, so that dialogue may be re-initiated in good faith,” the prime minister said.

“The risk of an accident lurks when so many military assets are gathered in such a contained area.”

Athens would not seek to escalate the situation, he said, but added: “No provocation will though go unanswered.”

Hulusi Akar, the Turkish defence minister, echoed the sentiment in an interview with the Reuters news agency.

“We want to reach political solutions through peaceful means in line with international laws,” he said, but warned that Turkey would continue to defend its “rights, ties and interests” in coastal waters.

Turkey says it has the longest coastline in the eastern Mediterranean but that it is penned into a narrow strip of waters due to the extension of Greece’s continental shelf, based on the presence of many Greek islands near its shore. 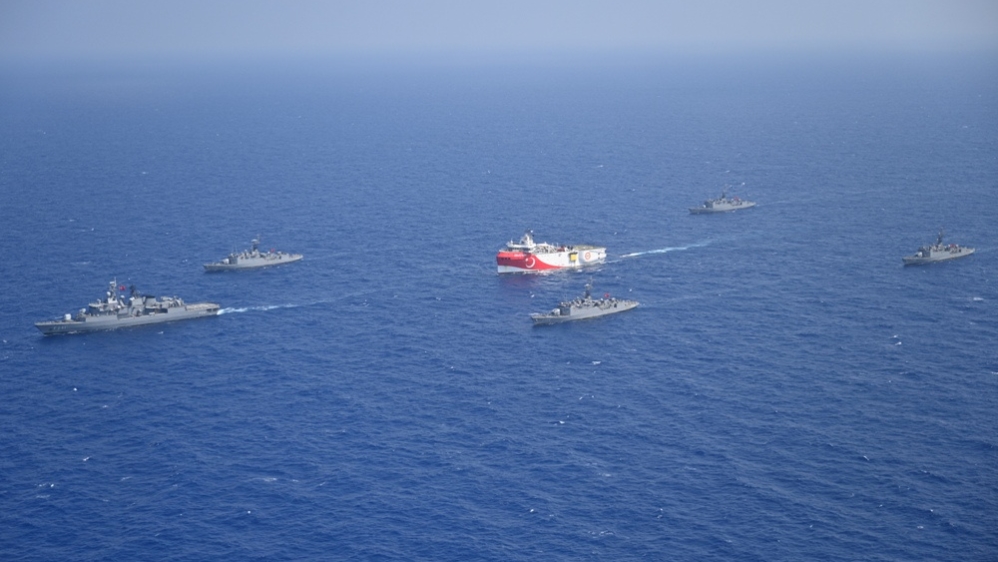 The island of Kastellorizo, which is some two km off Turkey’s southern coast and 570 km from the Greek mainland, is a particular source of Turkish frustration.

“Greece’s demand for a 40,000 square kilometre maritime jurisdiction zone because of the 10 km square Meis island (Kastellorizo) …cannot be reconciled with any logic,” he said.

Greece’s claim to the waters around Kastellorizo is based on a UN maritime convention endorsed by many countries, but not Turkey.

Ankara said it would issue new exploration and drilling licences in the eastern Mediterranean, while Athens has demanded the immediate withdrawal of the Oruc Reis from the area.

Greek Foreign Minister Nikos Dendias was due to fly to Israel on Thursday for talks, his office said, and is also to address the issue with US Secretary of State Mike Pompeo in Vienna on Friday.

Charles Kupchan, senior fellow at the Council on Foreign Relations, said NATO members were increasingly worried about the potential for a confrontation between Greece and Turkey.

“Nobody wants to go to war. Nobody wants to see two NATO members mix it up, ” he told Al Jazeera. “On the other hand, when you have this many naval vessels, when tensions are this high … things are in a dangerous place.”

Noting the diplomatic scramble to defuse tensions, Kupchan said: “In some ways, you are seeing an all hands on deck diplomatic response … And I think the French are trying to say hold on, we are going to try to cool the temperature here before things get out of hand.”

A similar crisis last month was averted after Turkey pulled the Oruc Reis back to hold talks with Greece and rotating EU chair Germany.

But the mood soured last week after Greece and Egypt signed an agreement to set up an exclusive economic zone in the region. The Turkish foreign ministry has said the Greece-Egypt agreement was “null and void”.

Egypt, Cyprus and Greece have likewise denounced a contentious deal, including a security agreement, signed last year between Ankara and the UN-recognised government in Libya.