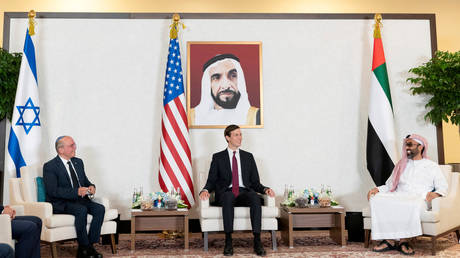 The former head of Qatar’s Al Jazeera news network wants a list of Arab journalists who backed the decision by the UAE and Bahrain to mend ties with Israel. He said it was for documentation purposes, not to shame them.

“For the purpose of documentation: who are the journalists, writers and politicians who supported UAE and Bahrain’s agreement to normalize relations with Israel?” Yasser Abu Hilala, who was in charge of Qatar’s state broadcaster Al Jazeera Arabic from 2014 to 2018, asked his Twitter followers.

Abu Hilala wanted people to send him names of those journalists and their publications so that he could add them to what he called the #NormalizersList. He suggested three journalists from Jordan, Saudi Arabia and the United Arab Emirates (UAE) to start the roster.

The call initially came in Arabic, but was later followed by dozens of tweets in English.

The former Al Jazeera head said that he considered normalization with Israel “a stab in the back” and a betrayal of the rights of the Palestinian people. His stance was in line with the harsh criticism of UAE and Bahrain in Qatar’s media in recent days.

Qatar has difficult relations with its Arab neighbors after the UAE, Saudi Arabia, Bahrain and Egypt implemented an embargo against it in 2017. They accused Doha of supporting terrorism, due to its ties with Egypt’s Muslim Brotherhood group, and meddling in the affairs of other countries.

Riyadh and its allies issued an ultimatum, saying that restrictions would only be lifted if Qatar agreed to fulfil a set of demands, including shutting Al Jazeera down. But Doha, which denies any wrongdoing, refused to play along.

The Saudi-funded outlet Al Arabiya published an article about Abu Hilala’s plan, saying that he was putting together a “blacklist” and that it “was seen as a direct attack on his colleagues.” But he denied all accusations, insisting that Al Arabiya’s claims were “false” and that it deliberately misinterpreted his actions.

Abu Hilala said that the list was “a normal process of gathering information,” which is something that journalists do. “I didn’t call it the ‘list of shame,’” he pointed out.

He even joked that those on his list would likely be honored by the Dubai Press Club in the UAE.

4-It’s a normal process of gathering information and I didn’t call it the ‘list of shame’. In fact this list may be honored by Dubai Press Club😂

Abu Dhabi agreed to the normalization of ties with Israel in August, while Bahrain announced that it’ll be joining its Arab ally on Friday. The three nations are expected to sign a declaration of peace in the White House next week, as the US is actively involved in their rapprochement.

The move was harshly criticized by Palestine and Iran as it contravened the long-standing joint stance of the Arab world that normalization with Israel is possible only if Israeli forces withdraw from the occupied territories and Palestinian statehood is accepted.