Trump tested positive for the coronavirus just two days after debating Biden in Cleveland, Ohio. While Biden has so far tested negative, the Commission on Presidential Debates – the NGO running the process – decided to almost double the distance between Pence and Harris, from 7 feet (2.1 meters) to 13 (4 meters).

On Monday, the CPD agreed to put plexiglass barriers not just between the candidates, but between them and the moderator, Politico reported citing “people familiar with the discussions.”

NEWS: Debate commission has approved plans for plexiglass to be used at Wednesday VP debateBarrier will separate Pence and Harris, and the two candidates from moderator Susan Pagew/ @ccadelagohttps://t.co/GpRiEJurbQ

The debate is scheduled to take place in Salt Lake City, Utah on Wednesday. Harris’s team was reportedly arguing in favor of the barriers, while Pence’s campaign opposed it.

“If Senator Harris wants to use a fortress around herself, have at it,” Politico quoted Pence’s spokeswoman Katie Miller.

Later on Monday, Harris’s press secretary Sabrina Singh reacted by saying that Pence is “supposedly in charge of the [Covid]-19 task force and should be advocating for this too.”

Interesting that @VPComDir Katie Miller mocks our wanting a plexiglass barrier on the debate stage, when her own boss is supposedly in charge of the COVID-19 task force and should be advocating for this too. https://t.co/4FYyMGxoSC

Miller had contracted the virus herself this spring, and recovered from it after a three-week absence. Her comments did not go over well with some Democrats.

Now we turn to Katie Miller, a Pence spokeswoman WHO TESTED POSITIVE FOR COVID IN MAY, HOURS BEFORE THE VICE PRESIDENT TRAVELED TO IOWA ANYWAY, WHERE HIS AIDES INSISTED THAT PEOPLE REMOVE THEIR MASKS BEFORE MEETING HIM https://t.co/Vd1BIg1eU8https://t.co/9hCci05eUT

Trump’s critics have already spent the weekend melting down over the president insisting he was feeling fine, his foray into the crowd of admirers outside the Walter Reed Naval Medical Center in Bethesda, Maryland – even if inside an armored limo and wearing a mask – and his release on Monday evening, feeling “better than 20 years ago.”

Those who chose to think in practical terms praised the plexiglass decision, however, pointing to the stunt at the Senate debate in South Carolina over the weekend. Democrat Jaime Harrison brought his own sheet of plastic to the debate with Sen. Lindsey Graham, the Republican incumbent, citing an abundance of caution.

Kamala should do what Jaime Harrison did in his debate with Graham. Stand behind a plexiglass barrier. 12 feet distance planned for this VP debate is not enough health security for her.

70% of adult EU population fully vaccinated against Covid, but not equally distributed across bloc 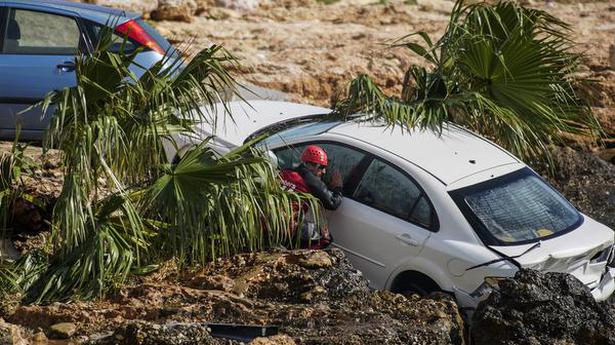