Matamoros, Mexico – As the US hurricane season heats up, hundreds of migrants who applied for asylum in the United States and are living in a tented community in northern Mexico near the border with Texas have found the rising rivers of the Rio Grande the newest threat they face.

Hundreds of asylum seekers living in already squalid conditions in Matamoros, northern Mexico, were forced to retreat to higher ground when the level of the Rio Grande rose by 12 feet (3.7 metres) after the year’s first Atlantic hurricane, Hanna, lashed Texas.

“There was no warning. The first thing we noticed was that the river had arrived at the edge of our tent,” said 22-year-old mother of one Karina who lives with her husband and four-year-old daughter in the tented encampment. It sits on the banks of the Mexican side of the Rio Grande, a byproduct of US President Donald Trump’s “Remain in Mexico” policy that prevents asylum seekers from waiting in the US.

Karina, six-months pregnant, had to move her tent and belongings away from the lower, shaded part of the migrant camp onto a levee, where, in direct sunlight, the temperature inside the dwelling now reaches over 100 degrees Fahrenheit (37.8 Celsius).

“The levee was purposely designed to allow for the park to flood during intense storms and hurricanes,” said Erin Hughes, an engineer volunteering with Global Response Management (GRM) and Resource Centre Matamoros (RCM), two prominent non-governmental organisations working with the camp residents.

In the months prior to the storm, Hughes had suggested that the most vulnerable people should be evacuated when the Brownsville river gauge reached 19 feet (5.8 metres) with a full evacuation at 21 feet (6.4 metres).

In the wake of Hurricane Hanna, the Brownsville river gauge increased from 12 feet (3.7 metres) on Monday morning to 19 feet (5.8 metres) on Wednesday morning and then to 24 feet (7.3 metres) on Saturday July 31, according to the National Oceanic and Atmospheric Administration.

On Tuesday, as it became apparent that the river banks would breach the camp, Mexico’s National Institute of Migration (INM) suggested an evacuation and offered the help of the Mexican marines and buses to do so, said Sister Norma Pimentel, the executive director of Catholic Charities of the Rio Grande Valley.

This gesture was interpreted by some of the camp’s residents as an underhand tactic to close the site. “Nobody wanted to leave” explained Juan*, 30, from Honduras. “People were afraid that if they went, they wouldn’t be able to come back”.

“The problem” explained Santos, the leader of the 28 Mexican families in the camp, “is that there is a complete breakdown in trust”.

Pimentel acknowledged that lack of trust in Mexican authorities factors into what they do. Working with asylum seekers held in Mexico is like an “elaborate dance [where we must] weave all kinds of people together” she acknowledged.

While aid organisations were assessing risk, the owner of the camp’s 50 portable toilets removed most of them, explained Pimentel. “We were left without enough toilets”, explained Carolina* a mother of two from Nicaragua. “We had to go to the toilet in the open air,” she said.

“This hurricane wasn’t a direct hit,” said logistician Brandon Tucker, 26, a Texan working for both RCM and GRM. In terms of damage, “nothing is permanently broken other than a few tents. But we want to be able to provide basic human rights for the residents of the camp. We can’t do that without toilets, sinks, etc.” 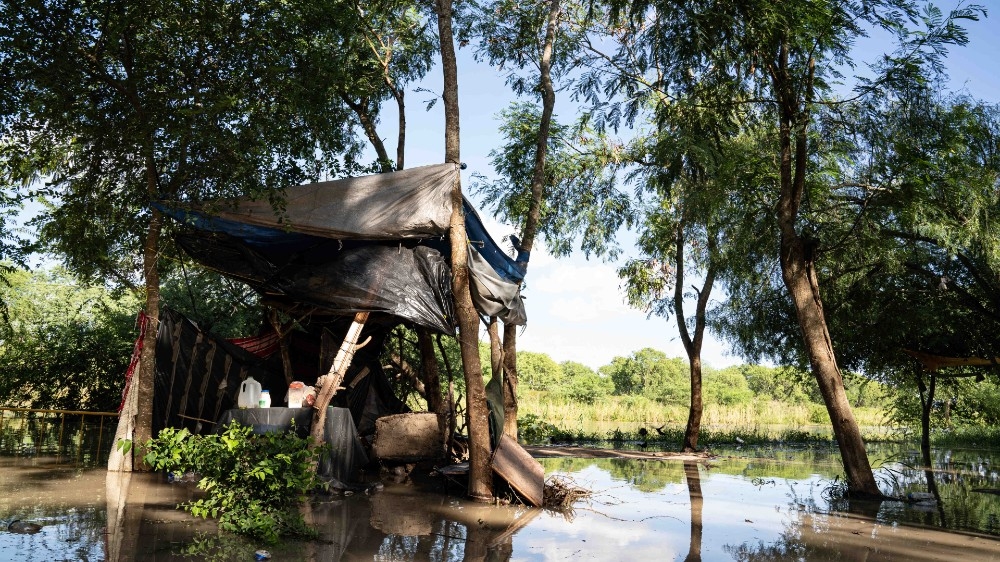 As well as flooding and the removal of facilities, the water has brought in rats, snakes and mosquitos.

Juan described the situation in the camp as “a calamity” just as a rat scuttled through his legs only to be clubbed by a nearby man digging out earth for a new tent location on the higher ground.

Despite the harsh conditions, the residents try to protect the environment. 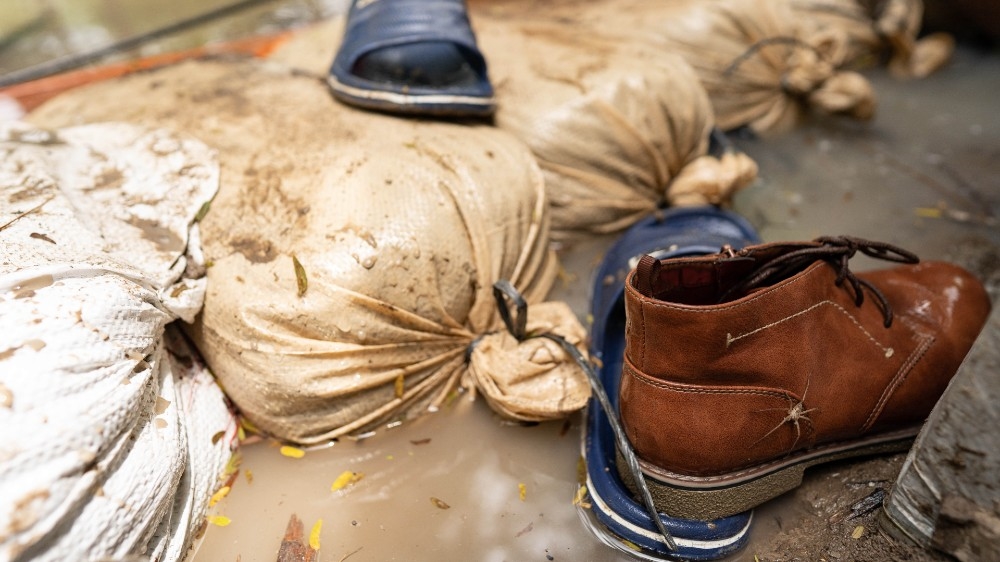 “We want to avoid the rubbish washing into the river and ultimately out to sea”, said Santos.

Teams of asylum seekers worked to clear debris from the lower levels of the camp with small fires burning organic rubbish, together with the occasional rat.

As part of the clean-up effort, Emelia Valle, an energetic 52-year-old Guatemalan woman, waded into pools of deep water to retrieve sunken belongings, while dozens of small dark snakes slithered through the muddy waters around her.

As she attempted to clear the area, a small boy about four years old stood on recently submerged sandbags that only 24 hours before had been installed to protect the camp against the encroaching river.

To the north of the camp, two bridges allow cars and pedestrians to cross between Mexico to the US. Valle regularly checks the levels of the river by wading out to look at hand-drawn markers on one of the piers. “The river has risen 1.5 inches (3.81cm) in the past five hours,” she said as she returned from one such trip, wet to the chest. 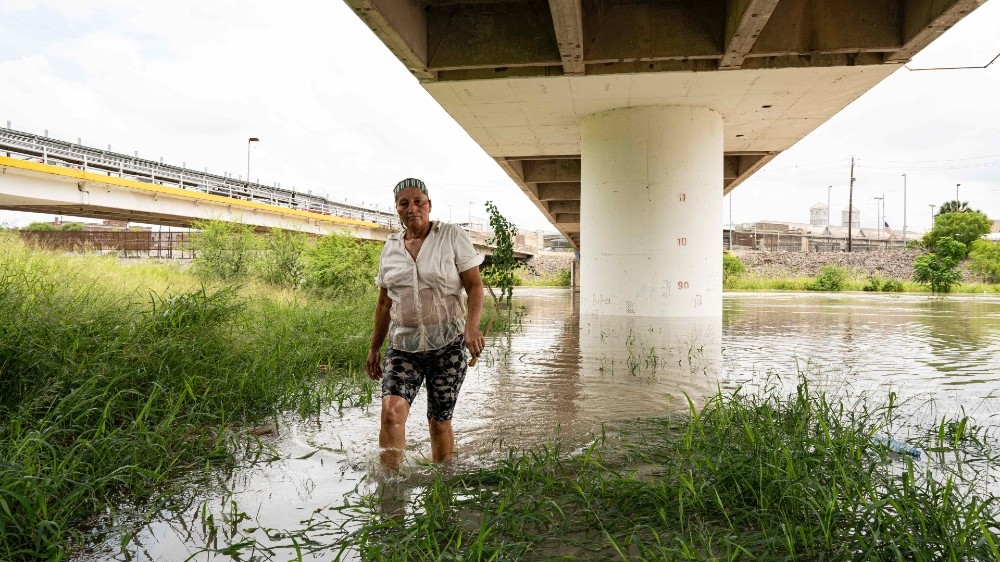 Matamoros, Mexico, August 1, 2020, a resident of the refugee camp inspects the sandbag wall that was laid to protect the camp from the expanding river banks [Lexie Harrison-Cripps/Al Jazeera]

As Santos talked about issues specific to the Mexican families under his leadership, he brushed aside a small amount of dirt from where his tent had been, to reveal a highly venomous red, yellow and black coral snake that he had recently killed. “If it had bitten me, I wouldn’t be here telling you this,” he said. “It is so dangerous for us to live in these conditions, but what else can we do?”

The swollen river banks have also brought “clouds of mosquitos” explained Ryan Kerr of GRM, “which can bring diseases such as dengue or chikungunya”.

“Some people have left the camp to rent an apartment in the city,” said Juan. “But the majority stayed. It’s just too expensive to pay the 200 dollars to rent.” Renting also brings extra food costs as only camp residents are given food parcels.

Berta, a 61-year-old Venezuelan, wept as she described having to leave the camp when conditions became too tough. She now shares a two-bedroom, one-bathroom apartment with 11 other people.

In her bedroom, there are two mattresses, which are shared between five people. The rent would normally be $200 for the apartment but is being covered by an aid organisation, explained Berta.

Despite the cramped conditions, living in the apartment has allowed Berta to follow her diet prescribed by doctors as a result of her health conditions.

Not only is she diabetic, but also has Chronic Obstructive Pulmonary Disease, putting her in a high-risk category for COVID-19.

“The advantage of being in the apartment is that we have a fridge where I can store fruit, milk, and other foods that mean I can have a better diet.” Social distancing is not an option.

Space is also a problem in the camp. As the banks of the river encroached, “the residents moved their tents to higher ground meaning that they were more squashed in” said Dr Dairon Elisondo Rojas, a volunteer doctor with GRM and a Cuban asylum seeker.

“This makes social distancing during the pandemic even harder.”

While Mexicans are not supposed to be included in the Remain in Mexico policy, several Mexicans, including Santos, have been told that all applications are suspended during the pandemic.

Since April, all hearings in the US have been postponed with applicants asked to phone a US number to arrange a new date.

The number requires enough credit to make an international call and is said to only work intermittently.

“I can’t get through,” said 56-year-old Honduran, Maria Isabel. “If someone does answer, they don’t speak Spanish”. Like most asylum seekers in Matamoros, Maria speaks no English.