Lesbos, Greece – Days after a fire reduced Europe’s largest refugee camp to embers, flames continue to break out around the charred remains of Moria.

Fire engines race back and forth over the Greek hillsides to extinguish the new fires, weaving between families languishing on the surrounding roads and olive groves.

The air smells of burnt plastic and smoke. The sounds of people yelling and children crying come from all sides.

Thousands of people remain trapped between the smouldering camp they cannot return to, and lines of police who do not permit them to enter the nearby city of Mytilene.

On these roads around the camp, confusion prevails. People wonder why the fire started, how long they will have to remain on the streets and what will happen next. 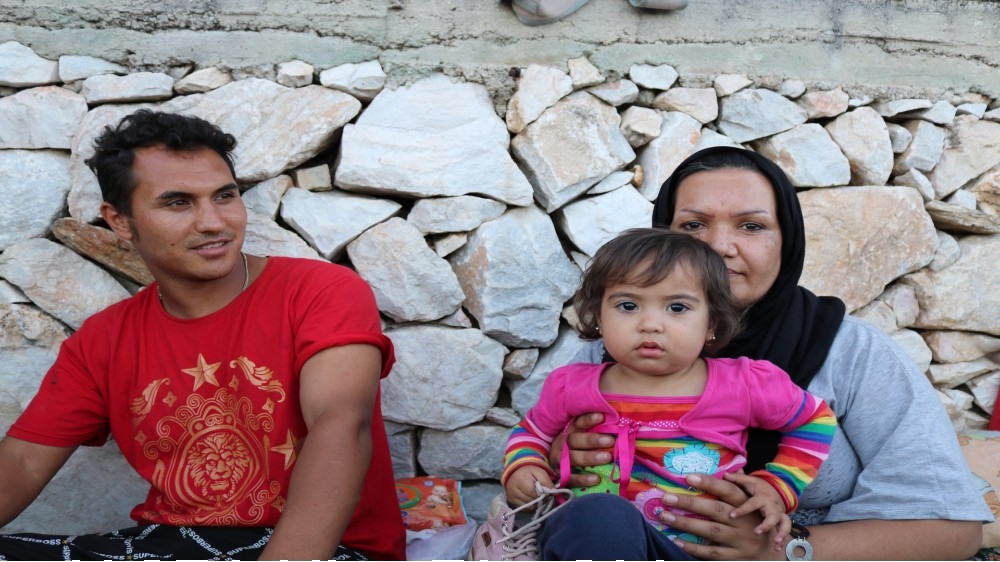 Ahmed Sadiya said at first, clashes between refugees and police prevented some from fleeing the fire [Moira Lavelle/Al Jazeera]

“We are here and we don’t know anything,” Ahmad Sadiya, 29, an asylum seeker from Afghanistan told Al Jazeera. “We just have to wait here for some people to help us.”

Sadiya was sleeping in a container with his wife and three small children when the fire broke out in the early hours of Wednesday.

They heard people shouting about a fire, but at first, when they tried to flee, they were stopped by police throwing tear gas. As the flames grew they were able to run for the streets.

The Greek government maintains that the fire was started by asylum seekers as a response to continuing coronavirus lockdowns and tests.

Moria refugee camp had been under an extended lockdown since March. Last week, it was put in an even stricter lockdown after 35 residents tested positive for COVID-19.

In a statement on Wednesday, Prime Minister Kyriakos Mitsotakis said: “I recognise the difficult conditions. However, nothing can become an alibi for violent reactions to health checks. And, much more, for riots of this magnitude.”

Pamela Kanda, 28, an asylum seeker from the Democratic Republic of the Congo, cannot comprehend why she is stuck on the road between the camp and the city, and why she is not permitted to leave to get food or nappies for her two-year-old child.

“They don’t want anybody to pass,” she said. “They don’t tell us anything.”

Her phone has run out of battery, she has nowhere to charge it, and so she has no source of information from the outside world. She does not know what will happen next.

Nearby in the same olive grove, 16-year-old Tamadur Al Bario’s family also lacks access to food and water. She picks up a baby cousin to show bug bites on the nape of her neck, and a thick white scar from a bomb in Syria. They are running out of formula.

“Where are the organisations to help? No food, nothing? Why?” she asks. “Nobody came to help. We will die, we will stay in the road, for them it’s no problem.”

Amid the heat and hunger, concerns about the coronavirus loom large.

Of the 35 Moria camp residents who were diagnosed with the illness, only eight have been located and quarantined.

Here, people are unable to socially distance, and have no access to running water or sanitary products.

So far, few viable solutions have been proposed for the 13,000 residents of the former Moria.

Notis Mitarakis, the migration minister, said that some 3,500 asylum seekers will be accommodated in a commercial passenger ship and two naval barges, and the rest will be provided with tents in different areas on the island. 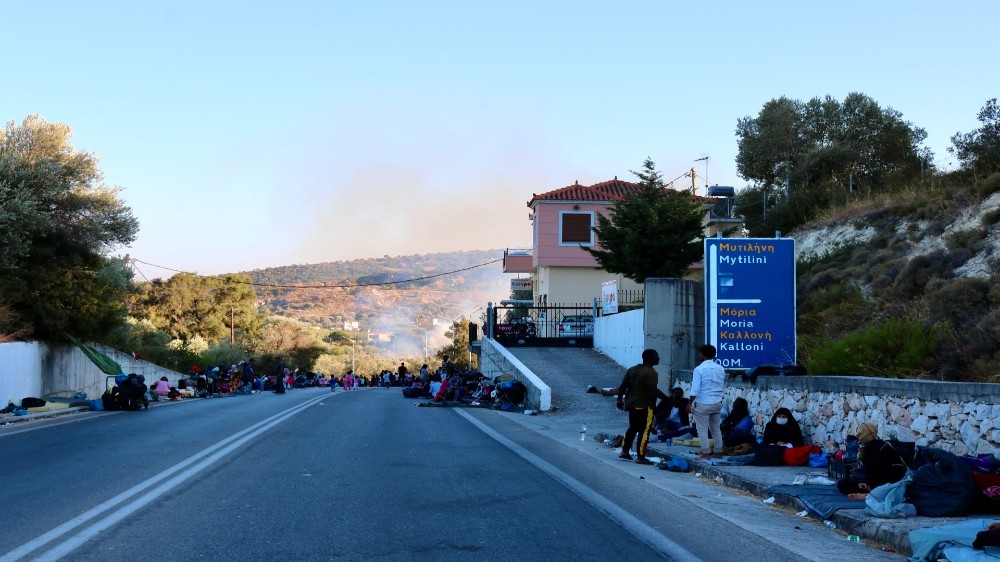 Asylum seekers have been stranded on the street between the former Moria camp and Mytilene city, prevented from leaving by a line of police [Moira Lavelle/Al Jazeera]

On Friday morning, tents and other relief items were being delivered to a field next to the former Moria camp. However, It remains unclear when people will be able to access this aid.

In the long-term, Mitarakis has remained firm that the government will proceed with the planned construction of a closed detention centre on the island – a move residents and aid organisations have protested against for months.

“We really starkly condemn any move to this kind of closed setting,” Christina Psarra, the general director of Doctors Without Borders (known by its French initials MSF) in Greece, told Al Jazeera.

“We reached this point because of this approach of closing the camp. They cannot build from the ashes, the same thing that caused so much pain.”

Many refugees in Lesbos had never heard of the plan to build a closed camp.

“I don’t know what the government will decide,” said Mohammad Zaher, 42, an asylum seeker from Afghanistan.

“Will they make Moria again or no? Where will we be?”

Zaher has been without food and water for more than two days.

Obstruction of justice? Mueller’s team WIPED over 30 cell phones before turning them over to inspector general

Swing and a miss: CNN mocked for laughable ‘fact check’ of Biden branding Trump ‘xenophobic’ for halting travel from China